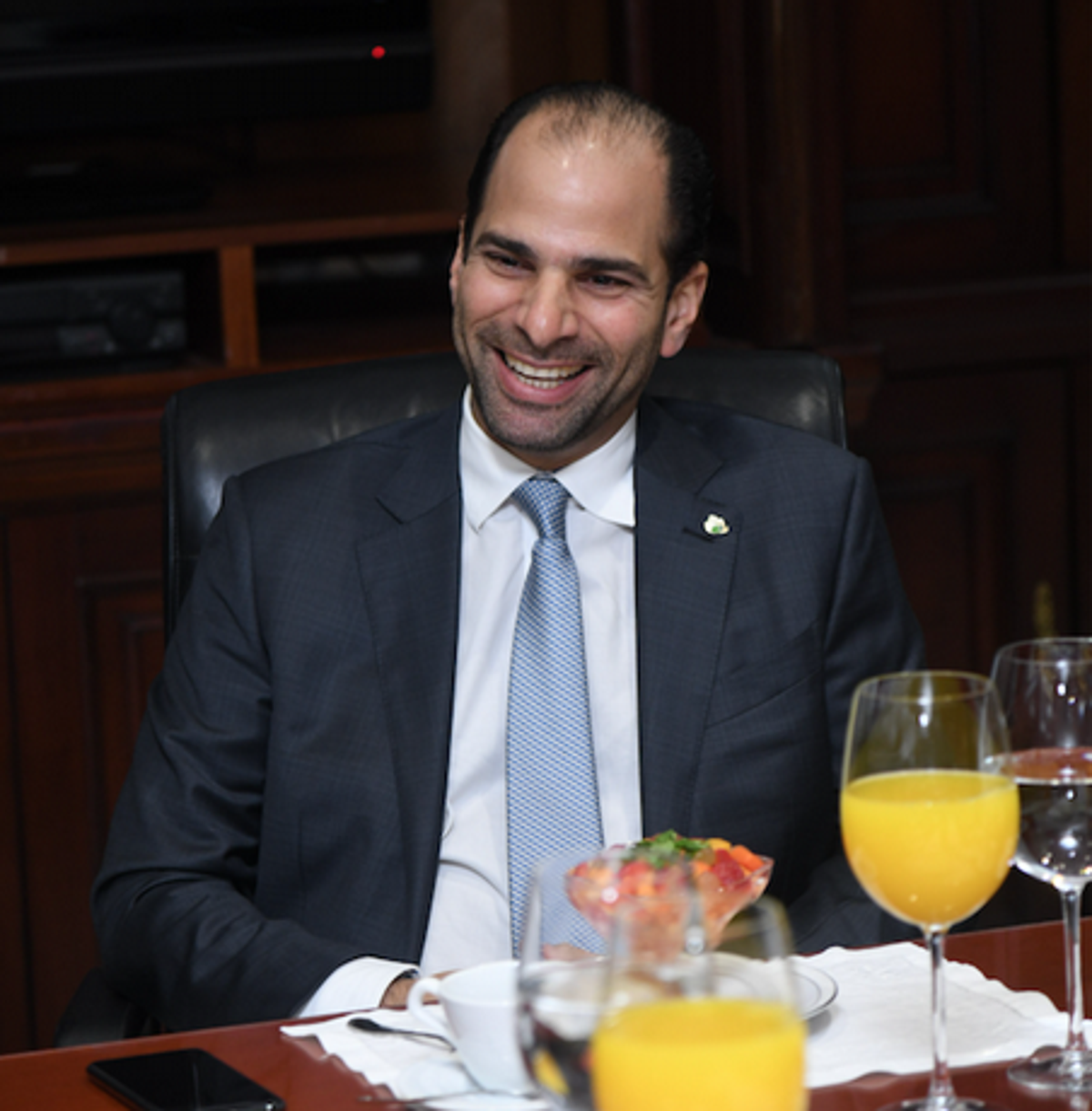 His business gift was not the only thing Frank Elías Rainieri inherited from his father, Frank Rainieri, but also his vision of developing sectors with great potential and minor exploitation.

Frank Elías, who just six months ago became his father’s successor as president of the Puntacana Group, already has several projects in the pipeline that go beyond the tourism sector and seek to turn Punta Cana into the Silicon Valley of the Caribbean.

The current vision of Frank Elías is that Punta Cana is more than sun, beach, and hotels. It is about diversifying his business model and promoting a new industry, just as his father did 50 years ago in this destination.

The purpose of making this tourist destination much more dynamic has led to the creation of projects such as “Punta Cana Hub”, with which it is intended to create technology companies in the area and create an equity fund to promote fintech, according to statements given by Rainieri at the Listín Breakfast, headed by the president of Editora Listín, Manuel Corripio Alonso.

Free Trade Zones
Given this reality that the Puntacana Group now assumes, an investment of RD$18,000 million is expected within the next 36 months in five large strategic projects to achieve the relaunch of the family business. Rainieri, who was accompanied by Simón Suárez, former president of the Association of Hotels and Tourism of the Dominican Republic (Asonahores) and current Vice President of Institutional Relations and Projects of Grupo Puntacana, highlights that one of the projects will be a free zone park of 200,000 square meters of industrial warehouse, which will consist of a combination of technological and medical products, in addition to working so that many high-end products that are not finished here finish their manufacturing process in the country.

Maintenance
Likewise, an MRO workshop will be developed for the maintenance, repair, and operation of large aircraft, a project that entails an investment of RD$2,000 million, which is in the closing phase of the agreement and will demand 1,000 aviation engineers.

Among the jobs that will be carried out here are painting planes, repairing brakes, and renovating aircraft interiors.

Logistical center
Likewise, Rainieri, in the Listín meeting where the director and deputy director of the medium, Miguel Franjul and Fabio Cabral, also participated, reported on the development of a logistics center to transport cargo from South America and North America from Punta Cana to Europe.

“For example, the fruits from Peru that go to Europe can arrive by ship to Caucedo or Haina and from there to Punta Cana and leave by plane to Europe. With this method, they manage to reduce transportation from one month to two weeks”, explains Rainieri.

In addition, there are logistics centers in Europe for merchandise such as clothing and pieces that can be installed in Punta Cana and from here send their products to South America in less than 12 hours.

Other initiatives
However, the Puntacana Group will not abandon its raison d’être. Still, it will complement it, for which it also plans to develop a new hotel and the expansion of terminal B at the Punta Cana airport.

Rainieri states that there is still a challenge that the destination must face. For example, although nearly four million tourists arrive in Punta Cana each year, there are only 100,000 residents in the area when the figure should be between 350 and 400 thousand residents.

The owner of the tourist company understands that the current statistics do not correspond to the hotel density and that if new residents arrive in Punta Cana, this would attract new jobs, schools, supermarkets, and the installation of other businesses.

DR in Fitur
Rainieri has a strong conviction when he speaks: “The Dominican Republic is in the eyes of investors,” adding that the Madrid tourism fair, Fitur 2022, showed that the country has to look abroad for investors who will be able to continue with the sustainable development of tourism.

For him, these entrepreneurs with whom the country encourages a relationship are the ones who will invest in the three current large local tourism projects: Puerto Plata, Santo Domingo and Cabo Rojo in Pedernales.

“The Dominican Republic has come out of COVID very strong, there is no country in the world that has recovered so quickly in the tourism sector,” he highlights.

Loans
Rainieri indicates that the Dominican banking system has primarily supported the financing of the tourism sector.

“Today, Dominican banks have rates as competitive as any other financial institution in the world.Therefore, wee have an opportunity and a luck. We are a currency creation sector,” he states.

He underlines that the tourism sector is very satisfied with banking because when an investor decides to set up operations here, he seeks legal security, road safety and financing.

FAIRS
Abinader
Rainieri believes that President Luis Abinader at Fitur in Madrid, Spain, marked a before and after in tourism history.

Data
This tourist fair organized by Asonahores will receive all the foreign tourist offices to start working together to sell the destination this year.

Bring gigabit fiber optic internet connection to the island. Until internet infrastructure in DR is advanced, the “Silicon Valley” trope is a pipe dream.

Punta Cana, more jobs = good, increase of a population = more demand for water from the area’s fresh water table, the table is declining.. Aqueduct water from Higuey is wishful thinking.

Commercial development without infrastructure planning is a disaster waiting on the horizon..

I am part of the new wave of successful entrepreneurs who are looking to live in the DR😃 I sound alarm to raise the concerns that we are here to bring value to DR not to take from its so generous land but to infuse it with LOVE From America and Puerto Rico 🇵🇷 🇺🇸 ❤️
That my children might grow up together with the beautiful indigenous children of the Dominican Republic It would be an honor to raise my family here and have everyone of us make the conscious efforts to contribute to the fiber and spirit of your beautiful land, The Caballero family thanks you and hope to soon become part of the fabric called Punta Cana

I too love this beautiful place and the people who live and work hard to survive. Talking about making it into a “SILICON VALLEY ” is all fine and good but we all know it will take much time to happen. We must now continue to keep Punta Cana as one of the best Tourist destinations in the Caribbean. As I have been coming there for the past 18 years I have witnessed the growth with new hotels, attractions and new highways which allowed the tourist to travel beyond Punta Cana to see the other talked about towns that people view as a possible destinations for future visits to the DR. Asked why they are seeking to travel further away from Punta, they reply that they are tired of seeing Barvaro/Cortecito and Los Corales areas
that have not been addressed for years. The unpaved streets and the uneven sidewalks with motoconchos obstructing their way. They consider them dangerous for families walking to the stores and restaurants. Also the rubbish along the walkways is horrible. They hate going to the Priates shops on the beach because they are being pulled from one stall to another
Stop with building new hotels in the area….needed are more shops that they can visit within walking distance. People like to shop but not have to take buses to get there. Also needed is at least one food shopping plaza in this area. Let’s get the tourist what they want so that they will continue to visit the beautiful beaches of Punta Cana for years to come.

That all sounds wonderful but how do you stop the corruption especially with the police department. How do you correct 90% of the population living in poverty. How do you correct the ridiculously low pay scale. I tried living there. It’s third world all the way once you get outside the beautiful resorts. Very depressing to see so much poverty. It’s ridiculous. Sad for the Dominican people.

It’s jobs and opportunities for the people living there too.