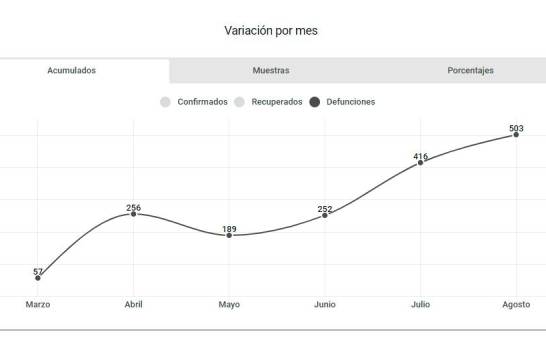 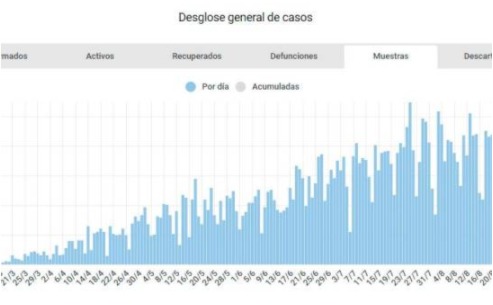 The COVID-19 fatality rate in the Dominican Republic is on the rise. According to data from the epidemiological bulletin published this Saturday by Public Health, the fatality in the country is 1.78%. This represents 10 decimal points more than two weeks ago (1.68%). The growth is due to the fact that the rate has been 2.96% in the last two weeks.

However, the rise in fatality can be explained by the low number of positive cases that have been identified in recent days. Which in turn is caused by a significant reduction in the number of tests.

Leaving out rates, samples, and percentages, August will close as the month with the most deaths in the Dominican Republic. Until this Saturday the deaths were 503, almost the same as about 18 deaths a day. When compared to July, which ended with 416 deaths and an average of 13 deaths per day, it can be said that in the country five more people have lost their lives per day than in the previous month. 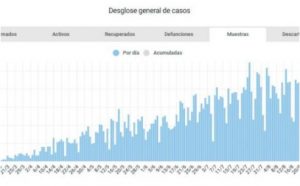 Despite the numbers, the Minister of Public Health, Plutarco Arias, said last Friday the following: “The curve has been flattening, we hope that we will continue to flatten it and that in the coming days, perhaps in 15 or 20 days we will have it lowered.”

It may seem an excess of optimism, but what the new Government has had in favor is that the positivity rate of the tests during the aforementioned period is at 17.78%, eight percentage points less than the general positivity rate (25.76% ) although experts make the caveat that the low number of tests does not allow us to build on the real situation of COVID-19 in the country.

Another data that may be relevant is that those recovered in recent weeks are 13,415 people, almost double the 7,423 confirmed cases that have been reported since August 16 to date.

Meanwhile, the Government has announced a series of new measures to counter COVID-19. In addition to the automation of the purchasing processes of the tests that are needed in the country, to begin analyzing some 7,000 tests daily. In addition, the hiring of a thousand doctors, the authorization of 17 public laboratories, and the increase in the availability of beds and the inclusion and participation of municipalities and social organizations in the development of programmed activities.

We’ll see if we flatten that curve.