Charities give Dominican Republic youngsters the gift of sight and sound 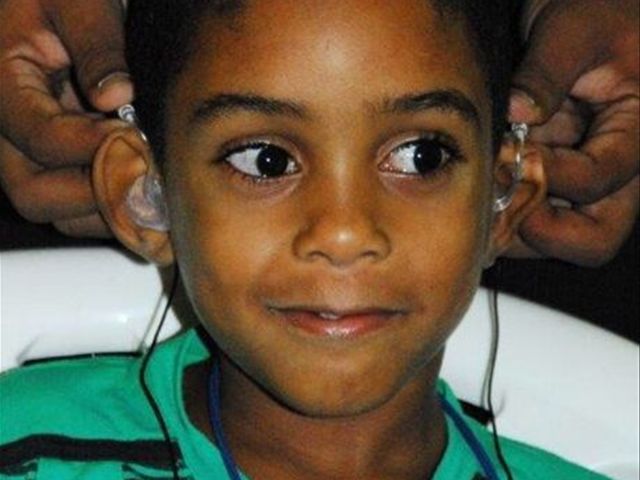 Santo Domingo.-Six-year old Dariel, whose hearing loss doctors classify as severe, suddenlysmiles and turns his head back to look at the technician adjusting his newhearing aid, as if to ask, “did you do that?”

The boy´s mother, whosename is omitted on patient-doctor confidentiality, said they didn’t realizethat Dariel was experiencing accelerated hearing loss, until his behavior beganto change. “He seemed alright but then he started to speak differently and hadmood swings.”

´The technical analysisis but one first step on a long road where audiologists and hearing techniciansat the Centro Cristiano de Servicios Medicos work to help him and dozens likehim recover their hearing, right at the age when their ability to learn is atthe crucial crossroads.

The clinic is the brainchildof the founders Janice and William Hunter, who hail from Arizona, and parentsof center administrator Nicole Hunter-Diaz. She heads the hospital known to thelocals as “Los Americanos” in honor of her parents, who started it in 1980.

The clinic´s undertakingrequires the assistant of professionals, and the Hunters get it from Dominican audiologistGenesis Troncoso, audio-tech specialist Olga Guzman, from Unitron Colombia and MichaelEdmond Isaac, Director of Media Relations – Sonova Group, of Switzerland, which created the Hear the WorldFoundation.

The center´s dauntingchallenge is evident right in the reception area, where as many as 100 patientsawait their turn for treatment mostly from ophthalmologists, and now addsaudiology, thanks to the agreement with the Foundation.

“The Hear the World Foundationis supporting a project in the Dominican Republic that would introduce, over afive-year period, an infant hearing screening program to detect congenitalhearing impairment,” the agency said in an email to draw attention to theambitious effort.

It said the Foundationprovided a grant to the Centro Cristiano de Servicios Medicos, Inc. for theproject that will be based at Los Alcarrizos, around 10 miles north of thecapital.

The Hear the WorldFoundation volunteers came to the country early Nov. to work on installing thedonated leading-edge equipment, to conduct pediatric fittings and on-the-groundtraining for the locals on its functions.

The surprisingly largecomplex is located at the very end of Duarte St., the main artery of thesprawling barrio Hato Nuevo, part of the bedroom community of Los Alcarrizos,western Santo Domingo.

Hunter, a medicalprofessional following in the footsteps of her parents, takes us on a tour ofthe facility with neatly-separate units housing the various specialties andsupport personnel, whose professionalism was not doubt instilled by thefounders.

“We are in the processof revamping this entire area,” she says beaming as we walk to one of theaudiology labs, now fully equipped with the Foundation´s support.

In a country where mostprivate and public health facilities function on the brink of chaos, the workby the Hunters and the support of the Hear the World Foundation assure new hopefor so many youngsters who´d otherwise have to adapt to a grim reality ofeither partial or total and often permanent loss of their hearing or vision.