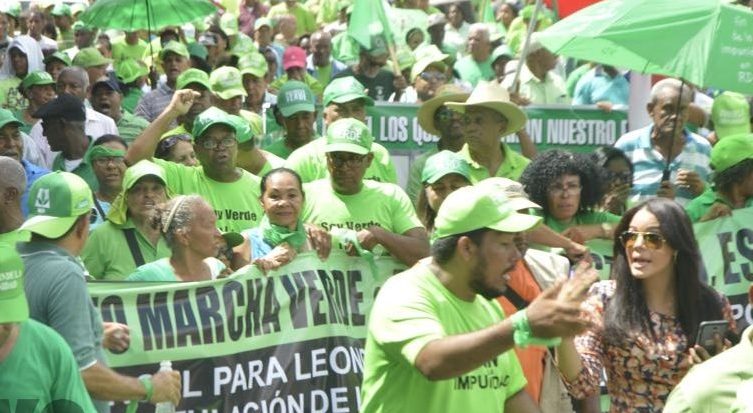 Santo Domingo.- The Green March on Fri. called the indictments in the Odebretch case unsealed by Justice minister Jean Rodríguez, “an unacceptable mockery to the population and the definitive consecration of Danilo Medina’s administration and the ruling party (PLD) as “a criminal government and party.”

The organization also labeled as unacceptable the exclusion of senior PLD leader Temístocles Montás, who admitted taking a bribe from Ángel Rondón to finance former president Leonel Fernández and Medina’s campaigns of 2008 and 2012.

The Greens said the Prosecution’s document is a shame and an unacceptable manipulation because it leaves out of the case all the high-level officials and legislators who personally took charge of managing and approving Odebrecht’s most lucrative contracts in Medina’s tenure: Gonzalo Castillo, Rubén Jimenez Bichara, Simón Lizardo, Reinaldo Pared, Abel Martínez, Cristina Lizardo and Lucía Medina.

“It’s unacceptable, the Greens said, that during the 2012-2014 period the Justice Ministry failed to identify and charge a single official responsible for receiving or managing Odebrecht’s bribes, when in that period Medina’s Mafia construction company transferred 62% of the US$92.0 million attributed to this illegal practice, and received, amid serious allegations of overvaluation, the country’s largest contract in history: Punta Catalina.”

“No Dominican concerned with the present and the future of the country can accept the Punta Catalina project’s “benediction” by a prosecutor who failed due diligence and by a group of businessmen and civil society members without any constitutional power to conduct criminal investigations.”