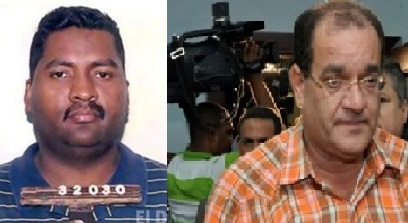 Santo Domingo.- The gang led by inmate Jesús Pascual Cabrera Ruiz from jail, in addition to engaging with hired killers and drug trafficking, arranged for his rival Winston Rizik to be sentenced to 20 years in prison, for which purpose an indeterminate amount of money was used as part of a strategy to keep the issue active in the media.

The information in this regard is included in the Justice Ministry’s request for the group before of the Judicial District of La Romana.

In the application obtained by El Nacional, there are the transcripts of the telephone conversations that the authorities recorded of the accused, with journalists, lawyers and officials of the judicial area.

The file contains the transcription of a recording of a conversation between the accused Juan Angel Peña Taveras and Víctor Alfonso Fernández, who was hired to follow up the hearings of Rizik.

In it Fernandez, in charge of keeping the hearings in line, told Peña Taveras textually, “Hey, but I did not see the cameramen because they go down to the parking lot and put a pod … that’s why I saw 3, because when I went inside, when I left I did not see them … Before I arrived there was nobody, because I entered because I had to arrive early to enter the room, `They will not ask me nothing`, because the secretary used to sit down when I sit down, she does not say nothing.”

That day Fernandez also made a report to Peña Taveras about the appearance to the hearing of Rizik of his daughter Yarik Rizik, in which he details the information that she gave to the media.

On June 21 another telephone recording was also made of a conversation between Peña Taveras and Fernández in which the latter gave a series of details about the audience that day they knew Rizik. In it, Peña Taveras asked Fernandez, “And still that trial has not happened ?, and he replied, but of course, I told him a while ago, but come here, you’re in limbo” According to the file, Fernández was the person who followed all the hearings of the Rizik case and in each of them he made a detailed report to Peña Taveras.

The report even contains all of Rizik’s movements during the hearings.

The file also contains the transcription of a recording about a telephone conversation between a person only identified as Turbí and Juan Miguel Silvestre de León (Juan). In the recording, according to the file, Silvestre de León (Juan) talks to Turbí about someone who was meeting with some judges, “he said to see if they put 20 years to Rizik” to which Turbí replied, “Aha,” already followed De León (Juan) responded “Let’s see if they give 20 years to Rizik and he told him later, the man (Jesús P. Cabrera Ruiz) later said no.”