Chapo Guzman sought a landing strip in the Dominican Republic 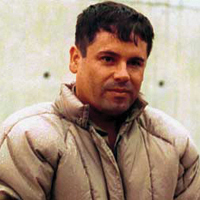 New York.- The Colombian Alex Cifuentes, Prosecution witness in the trial against Joaquin “El Chapo” Guzman in New York testified Mon. that his then boss ordered the murder of at least two people, although none were carried out.

He also detailed how they sought alternate routes to ship drugs to Mexico from Venezuela. “Joaquín needed a landing strip in the Dominican Republic to be able to act as a springboard to get to Mexico from Venezuela,” he said, after which a conversation was heard between Guzmán and Antonio, his contact in the Dominican Republic.

Antonio and another Dominican whom he identified as “La series” sold drugs for Guzman in New York, after having met them in the mountains at the end of 2007, where he spoke with them, in separate meetings, about how much drug they could sell during the week, the price per kilo of white heroin and cocaine.

He said that Guzmán began trafficking heroin, cocaine and methamphetamine to Canada in 2008, which at the beginning “was not constant”, only every 8 or 15 days, which used to pass through Los Angeles and Phoenix in the US, before his final destination, business that according to the witness earned him “tens of millions of dollars.”