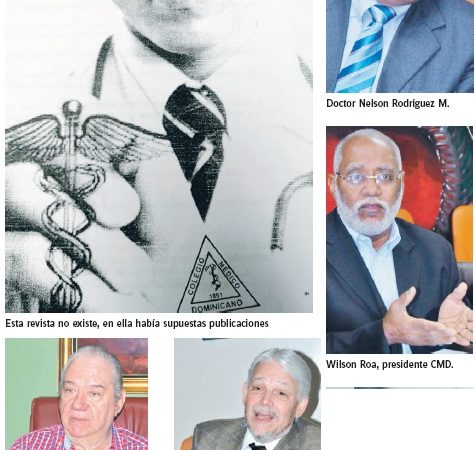 The falsification and plagiarism of articles to obtain points and obtain medical subspecialties and residences is an old practice that reveals the existence of a culture of fraud without consequences, and of an ethically ill society.

These considerations were presented by doctors Nelson Rodríguez Monegro and Bernardo Defilló, regarding the scandal caused by the irregularities incurred by doctors to access a subspecialty position in health centers.

Rodríguez Monegro, former director of the National Health Service (SNS), said that when he held that position he knew that publications were made to compete and that they charged up to RD $ 20,000 to include doctors in “scientific” jobs in which they had not participated

“There is a culture of fraud, without consequences, many take advantage of it, except for those who do not have sponsors,” said the former official, noting that it is not explained why the Dominican Medical College (CMD) is surprised by the aforementioned practice “fed up known. ”

According to research published by this newspaper, obtained from official medical sources and the guild itself, only 60 of 5,000 articles published in medical journals were original.

With that research, what has been going on for many years has been brought to the public’s attention, said Rodríguez Monegro, who insisted that publications are even made in medical journals created for these purposes.
When these doctors, supposed authors of the works, were subjected to the corresponding interviews to opt for the place, they showed total ignorance of the published topic, said Rodríguez Monegro.

“So strong is the culture of fraud that in the case of general practitioners, who aspired to medical residences, these supposed scientific works were practically eliminated, and the value of the exam was increased,” he said.
When referring to the same issue, Dr. Defilló considered that controls should be increased to avoid fraud and forgery in the medical world.

“This is a country with little regulation, and little organization, that facilitates fraud even in professional sectors, here anyone invents a title, a thesis, and even a specialty, and that must be stopped,” said the doctor.
He also recommends that the publications be analyzed and chosen the best, in any case, he insists, medical fraud is an indicator that “we are going wrong.”

CMD reacts. The president of the CMD, Dr. Wilson Roa, warned that this union will drastically sanction the doctors who are proven to have incurred plagiarism and forgery of documents for academic purposes, although he said that of the 5,000 records that are studied to determine their legality, only two have been false.

However, the data that led to the research establishes that about 2,000 doctors would have been the authors of 5,000 articles and presentations, of which only 60 are authentic.

Public Health has still not answered on the case. Since today it had access to the aforementioned information, it has managed to interview the Minister of Health, Dr. Rafael Sánchez Cárdenas, and the Director of Medical Residences, Doctor Bienvenido Peña, but it has been unsuccessful to get a response from both authorities.

The Ministry of Public Relations of the Ministry informed that the authorities are studying the files and that in the next few hours they will determine their position in this regard.

Prosecutor will investigate. The Attorney General’s Office informed that it will initiate an investigation to determine whether there was false writing, both private and public, in the medical articles in question, said Julieta Tejada, spokeswoman for the institution.

In that sense, she said that the investigation will begin in the National District, and according to the findings, other investigations will be opened in different jurisdictions. In the next few hours the Public Ministry will request from the Ministry of Public Health and the CMD all the documentation to submit it to the rigor analysis and determine who or who turn out to be attributable and will act accordingly, said Tejada.

Imposing legal sanctions that involve canceling sub-specialties already initiated would disrupt the development of health centers because such staff would be needed to care for patients. This was considered by Dr. Jorge Marte, an internist, and educator, who recommended that a plural commission investigate the complaint and establish the penalties of place.

Mars says that it has always been known that there are doctors with strong influences in the few legally known journals in the country that “offer the publication service in exchange for money, and the one who pays many times has no idea of ​​what is published.”

In some hospitals, doctors who participate to be sub-specialists are asked and have no information about it.
He insisted that this year a commission from CMD itself was appointed to validate publications, which does not seem to be the most valid instance. “If someone validates non-existent jobs or a participant manages to present fake work, there must be a great investigation,” he insisted.

The educator said that the participation of the competing doctor or people who had stamps or access to signatures in edited or fake publications should always be established. What is appropriate is to form a commission with a guarantee to investigate these criminal actions and that there is a regime of consequences.

The complaint published by Hoy caused discomfort and disturbance in some circles, there were disqualifications, however, the investigation consulted various sources.