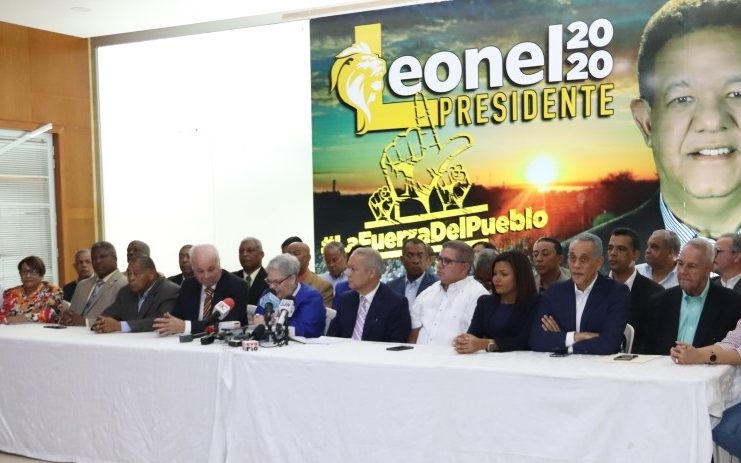 Leaders of Great Santo Domingo resigned yesterday from the PLD.

The Force of the People (LFP) party headed by Leonel Fernández has received the registration of 200,000 members in the first 48 hours of its launch, according to the leader of the new party, Bautista Rojas Gómez.

Rojas Gómez offered the information through his Twitter account. The representatives of the People’s Force informed that those interested in being part of the organization could do so through the page lafuerzadelpueblo.do

“In the first 48 hours of the existence of the Force of the People, about 200 thousand Dominicans registered voluntarily through our website. They have registered and enrolled in this renovating project of national hope,” said Rojas Gómez.

The Dominican Workers Party (PTD) will be renamed The Force of the People (LFP), and the process has already begun at the Central Electoral Board (JCE). That party will proclaim Fernandez as its candidate next Sunday. So far, at least five members of the PLD Political Committee have resigned, 13 secretaries, 33 undersecretaries, and several officials and others have been dismissed.

The departures of the PLD to be part of the LFP continue. Yesterday, 40 members of the Central Committee of the Santo Domingo Province and the National District resigned and announced that they would be part of the Fernández FPN.

In a statement read at a press conference they said that the resignations have convinced them that a serious, objective and responsible political exercise is impossible within a party in which the elite who direct it: “fill them with shame because they are a group of partners and merchants whose main objective is personal gain and that of their relatives.”

“The PLD was founded with obvious objectives, all aimed at achieving an inclusive, democratic, and lawful social state. Its founder conceived it as a party of organizations, with an environment where ideas prevailed, and the study and discussion of historical, political and economic issues were stimulated,” said the document.

He points out that the members of the Central Committee became an instrument at the service of an oligarchy. “The Peledeístas in general sense and the members of the CC in the particular, we happen to be instruments of a party oligarchy that rejected the dissension and avoided the divergence under the argument that any comment or disagreement violated working methods that had lost validity and they were only acclaimed when it was convenient for that oligarchy to silence voices that were in conflict with the group that controls the CP,” affirm the outgoing leaders of the PLD.

The PTD begins procedures to become an LFP

The PTD, which will become “The Force of the People,” deposited the documentation with the Central Electoral Board (JCE), which contains the decisions approved by the organization last weekend, which includes the name change. The secretary-general of the PTD, Francisco Luciano, informed the Caribbean that the delivery of this file does not contain the request for a change of name because it will be done after the meeting on Sunday.