Gonzalo and Danilo move thousands in march-caravan in the capital 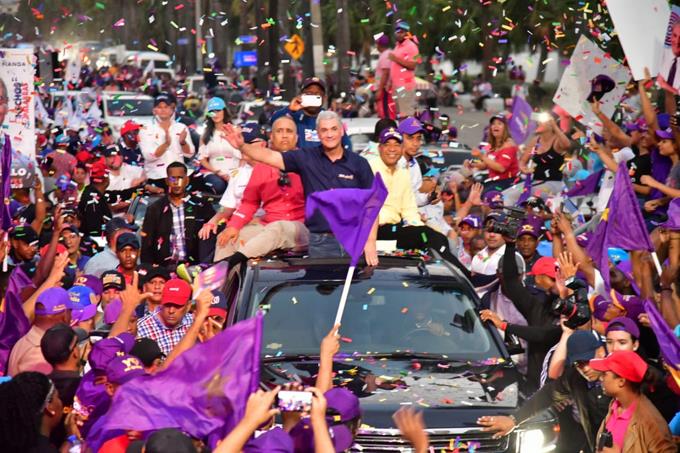 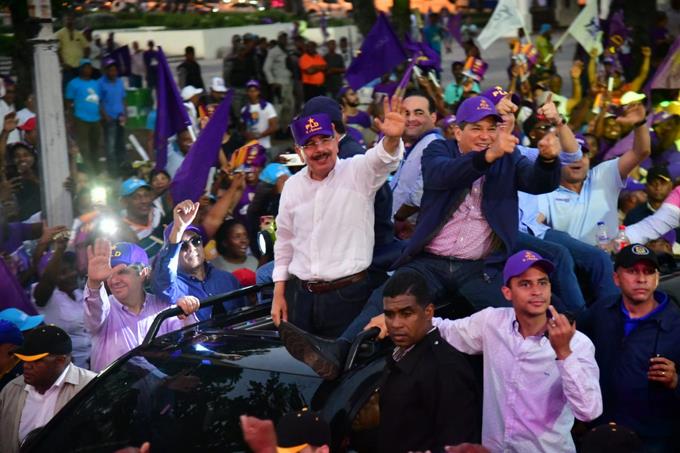 The presidential candidate for the Dominican Liberation Party (PLD), Gonzalo Castillo, proclaimed yesterday that with the support given by the population to the caravan march he made this Saturday, it was shown that this political organization has the most significant support.

“We will have a resounding victory with more than 70% in the mayor’s offices throughout the country, and in the elections, we go in the first round,” he said.

The former Minister of Public Works said that the PLD is now more active and more united, so he said that the victory is not taken away by anyone in the presidential elections next May.

“This caravan march demonstrates that it is the biggest party because it is in the heart of the Dominicans, who have seen that in the last seven years it is when we have advanced the most,” said Castillo.

The presidential candidate was approached by journalists while leading a caravan march alongside President Danilo Medina, which was aimed at proclaiming the municipal candidates of Greater Santo Domingo and is part of the events celebrating the 46th anniversary of the Foundation of that political organization. 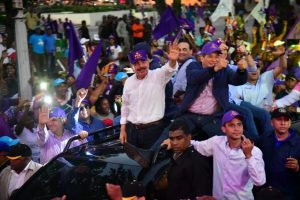 The caravan march began at the intersection formed by Pedro Livio Cedeño Street and Duarte Avenue and ended at the Malecon on George Washington Avenue.

The activity started at four in the afternoon, after swearing-in the candidates and thousands of people who sympathize with both the PLD and the allied parties joined.

The president of the Dominican Revolutionary Party (PRD), Miguel Vargas Maldonado, participated in it; Alexandra Izquierdo and other leaders of allied forces, among others, who placed pallets along Duarte Avenue and took numerous artists.

Castillo said that on commemorating this Sunday, December 15, the 46 years of the founding of the PLD, this anniversary is a special moment to assess a whole trajectory of political and electoral successes since Professor Juan Bosch began his best work: The Party of Dominican Liberation

He explained that among the aspects that can be assessed in the institutional life process of the PLD is the capacity shown to understand Dominican society and respond to their most pressing needs; therefore, he argued that the PLD has been evolving in these years, adapting to the new times.

“This anniversary comes precisely at a time of changes in our organization, changes that are strengthening and unifying it more to continue its trajectory of service to the Dominican people. As an expression of these transformations, today we present here, in Greater Santo Domingo, a diversity of candidates for mayors as a result of the open primaries made by our party and its strategic alliance with the Dominican Revolutionary Party,” said the presidential candidate.

In recent weeks Castillo has toured the country and said he has been able to feel and verify that the PLD has the majority of Dominican hearts.

Castillo also said that the PLD is the organization with the most legitimate and most competitive candidates to reissue the confidence of its people and to be able to reach the positions to which they apply, continuing their trajectory of service to the people.

“For that reason, I am today, together with the highest leaders of our party and allied forces, swearing-in the candidates for mayors of the different municipalities of the province of Santo Domingo and the National District, as an expression of the alliance that I will establish between the city councils and the government that I will preside from August 2020,” he said.

Throughout the march, Gonzalo Castillo, who was in a vehicle, and President Danilo Medina in another after him, greeted his supporters, many of whom left letters in their hands.

People went to the balconies of the houses with banners and objects in the colors of the ruling party and the allies.

On his side, the candidate for mayor of the National District for the PLD, Domingo Contreras, said that his victory is guaranteed in the municipal elections that will take place next February.

He said that on February 16, he would receive the vote of all the capitaleños who want a real change for the city, just as they did in the past elementary and with that build that new governance that citizens so long for.

He indicated that this would be accomplished with the “One more” campaign, where he touches the communities, towers, residential, Neighborhood Boards, from whom he has received the heat and support, because they have become vote multipliers, to allow him to repeat the victory next February.

“All this journey we have been doing has to be crowned with a strong electoral victory. The Dominican Liberation Party is the first political force in the capital, and we are going to achieve this victory that we have been building together,” he said.

Contreras said that the Gastronomic Route will be created generating a mixed offer of services in the popular sectors to benefit in an organized and harmonious way to locals and nonnatives and to make those places where, for example, chicharrón “light” is sold an attractive, with quality sidewalks, hygienic, illuminated, with security cameras and suitable for walking.

For Contreras, it is of great importance to guarantee the safety of all the capitaleños. So from the National District City Council, it will promote a better citizen coexistence and with it better security, by installing a monitoring and surveillance center in the nerve centers of the capital, with a staff 24 hours a day to respond and identify crimes and infractions that are committed in the shortest possible time.

“We will create security polygons in combination with human and technological resources, which, together with the construction of these surveillance centers, will allow us to interconnect with projects such as 9-1-1 and other initiatives that are already part of the daily life of the capitaleños! because the city is everyone’s house!” he said.