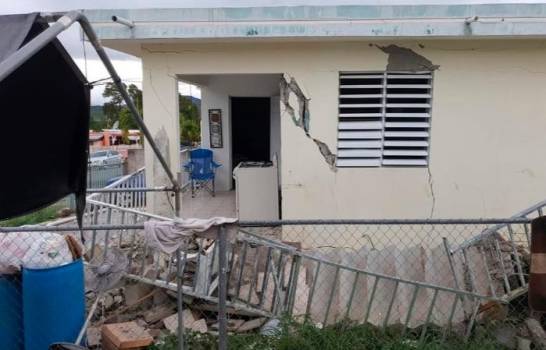 Damage caused by the earthquake in Puerto Rico includes serious cracks to some homes. (EXTERNAL SOURCE)

SAN JUAN (AP) – An earthquake of magnitude 5.8 shook Puerto Rico in the early hours of Monday, causing small landslides, power cuts and serious cracks in some homes. It was one of the most powerful registered in the American territory, which has been shaking for more than a week. The earthquake was recorded at 06:32 hours just south of the island, at a relatively scarce depth of 10 kilometers (more than 6 miles), according to the United States Geological Survey.

There was no threat of a tsunami, authorities said. Power cuts were reported in some parts of the island after the quake, Angel Vázquez, director of emergency management for Ponce, a southern city, told The Associated Press. According to Vázquez, it was one of the most powerful earthquakes recorded since the earth began to shake on December 28 and “lasted a long time.” Residents of the southern coastal towns published images on the internet of partially demolished houses and large rocks blocking roads, while the authorities called for calm. Dr. Sindia Alvarado, who lives in Peñuelas, a municipality in that region, said she was petrified. “My whole family woke up screaming,” he said.

“I thought the house was going to break in half.” In a hotel in the town of Guánica, on the southwest coast of the island, people panicked trying to flee in their cars, but large stones occupied the only road north, towards the capital, San Juan, The lawyer José Francisco Benítez told the AP.

The unusual series of earthquakes in the southern region of the island began on the night of December 28, with tremors whose magnitudes range between 4.7 and 5.1. Víctor Huérfano, director of the Puerto Rico Seismic Network, told the AP that the series of surface earthquakes were recorded in three faults located in the southwest region: Lajas Valley, Punta Montalva and the Guayanilla Canyon.

Tremors usually occur when the North American plate and the Caribbean plate squeeze Puerto Rico, and it is not clear when it will stop happening. One of the strongest and most devastating earthquakes in Puerto Rico was recorded in October 1918, an earthquake of magnitude 7.3 that hit near the northwest coast of the island, caused a tsunami and killed 116 people.