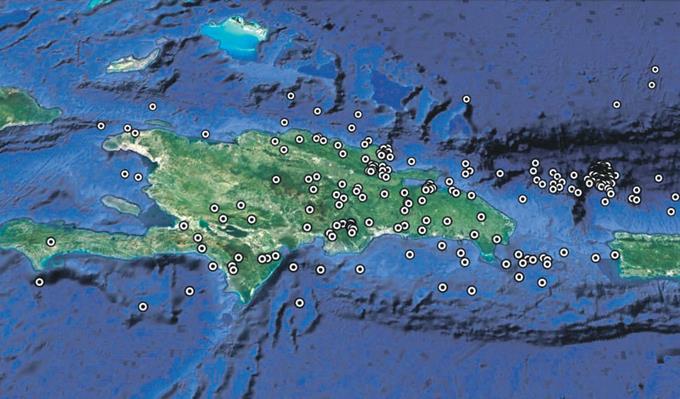 The dots in the image show the tremors analyzed by Seismology in September 2019, the month where more earthquakes were recorded that exceeded 4.0 degrees on the Richter scale. SEISMOLOGICAL

In the Dominican Republic and Haiti, 1,257 earthquakes occurred in 2019, most of them occurred in May with 144 earthquakes. The second place was occupied by August with 142 telluric movements.

Data from the National Seismology Center analyzed by Listín Diario recorded 109 earthquakes for March, 108 for July, 105 for November, 104 for January and 101 for April.

In the ranking made according to the number of tremors per month, December continues with 98 earthquakes, October with 97, September with 87, June with 83 and February with 79.

First 20 days
Until January 20 of this year, 88 earthquakes had been analyzed in the Dominican Republic, although this figure is not necessarily the total registered.

Around 385 earthquakes occurred around the country. This indicator is taken into account by the National Seismology Center to also analyze the presence of earthquakes that arise 100 kilometers from the country.

In Puerto Rico, located east of the Dominican Republic, there have been 7,000 earthquakes so far in 2020, of which about 100 earthquakes have had a magnitude greater than 4.0 degrees on the Richter scale.

Studied in 2019
The National Seismology Center (formerly the University Seismological Institute) analyzed 3,192 earthquakes that occurred last year on the island and its surroundings. The number of recorded telluric movements is always greater, according to the director of the entity, Ramón Delanoy. In October 373 tremors were studied, being the month of 2019 when this phenomenon was investigated more.

September was the month that most recorded earthquakes that exceeded 4.0 degrees on the Richter scale with an amount of 13 earthquakes.

Historical tremors
The book “Aspects of Dominican seismology” includes the telluric movements of the island that exceeded 4.8 degrees on the Richter scale, registering 29 earthquakes with this magnitude.

In 1562 there was a tremor in La Vega and Santiago leaving a large number of people buried. On September 8, 1615, another was registered in Santo Domingo where 24 people died. In 1691 the epicenter was Azua. This earthquake destroyed the province.

On October 18, 1751, the earth shook and El Seibo and Azua were the places where it was most felt. The consequences were demolished churches and a tsunami that did not cause serious damage. On May 7, 1842, the epicenter was Santiago, destroying the local villages.

On October 28, 1761, in Santo Domingo, an earthquake destroyed churches, monasteries, and hospitals. On November 21 of that same year in the South Region, there was another tremor that left catastrophic damage.

On June 3, 1770, a tremor with an epicenter was registered in Haiti and some material damage. Five years later, on October 5, there was a tremor in Santo Domingo.

All these earthquakes presented more than 7 degrees on the Richter scale, but the Dominican Republic did not have an instrumental seismic history.

Formality
On August 4, 1946, in the Northwest region, an earthquake of 8.1 degrees occurred on the Richter scale, the largest recorded in history after the country has a seismic instrument.

On April 21, 1948, in Santo Domingo, there was an earthquake that caused cracks in different structures and breakdowns. On May 31, 1953, in the North Region, an earthquake caused electrical damage and cracks in buildings. The intensity of this was 6.7 degrees on the Richter scale.

On January 8, 1962 in the South Central there were deaths and material damage due to a 6.4-degree tremor. On January 11, 1971 in Santo Domingo, an earthquake caused serious damage to buildings.

On June 24, 1984, southeast of Santo Domingo, there was a tremor of 6 degrees where walls collapsed. On September 2, 1987, in the northeast of the Dominican Republic, a 5.3-degree telluric movement caused notable cracks in buildings.

On November 3, 1987, in Santo Domingo and the South Central, an earthquake of 4.8 degrees was recorded. On September 5, 1988, in the Central South, a tremor of 5.5 degrees left dead and material damage.

In the eastern region, on October 11, 1991, a 5.2-degree earthquake had consequences such as damage to telephone lines and power lines.

On January 15, 1992, an earthquake of 5.6 degrees shook the southern region and on September 22, 2003, in Puerto Plata, an earthquake of 6.5 degrees caused deaths, injuries and irreparable damage to public and private buildings.

Figures
4.1
More magnitude
On May 16, 2019, the earthquake that had the greatest magnitude on the island that year was recorded with 4.1 degrees on the Richter scale.