Fossil of a symbol of Puerto Rico, the coquí, the oldest frog in the Caribbean 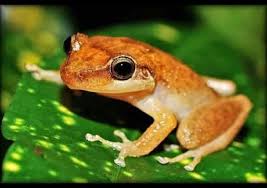 The DR’s got coquí frogs too

Researchers from the Florida Museum of Natural History (Florida University) and the Natural History Museum of Los Angeles County have published a scientific paper describing a portion of a left humerus (upper arm bone), discovered in north-western Puerto Rico that represents the oldest fossil remains of a frog ever found in the Caribbean.  The tiny bone, it measures less than one centimetre in length, has been assigned to the genus Eleutherodactylus, colloquially called coquí frogs in reference to the distinctive “coe-kee” call made by the males of some species as they seek to attract a mate.

The Fossilised Humerus is Compared to the Humeri of Extant Genera

The authors of the scientific paper comment that it is fitting to have discovered this fossil bone in Puerto Rico, as the coquí is one of the national symbols associated with this tropical island.

The tiny bone was found by co-author Jorge Velez-Juarbe (Natural History Museum of Los Angeles County), in a mudstone layer of the San Sebastian Formation, exposed by a river (Rio Guatemala), in the north-western portion of the island, close to the town of San Sebastián.  The mudstone layer has been dated to 29.47 million years ago (+/- 300,000 years) and it represents an estuarine environment.  Other vertebrate fossils associated with this location include turtles, gharials, and rodents.

“It’s a national treasure.  Not only is this the oldest evidence for a frog in the Caribbean it also happens to be one of the frogs that are the pride of Puerto Rico and related to the large family Eleutherodactylidae, which includes Florida’s invasive greenhouse frogs.”

A Life Reconstruction of the Prehistoric Frog

The 29 million-year-old Eleutherodactylus frog life reconstruction. Based on measurements of the partial humerus, the scientists estimate the extinct frog to have measured around 4 centimetres in length.

Looking for Evidence of Oligocene Frogs

Scientists studying data from phylogenetic assessments had postulated that these types of frogs had established themselves in the Caribbean during the Oligocene but until now there was no fossil evidence to support this line of research.  The bones of frogs tend to have a poor preservation potential.   They are small, light and any corpse would very likely, quickly decompose in the hot, humid tropical conditions.

Possibly first arriving in the Caribbean by rafts of vegetation displaced from South America, these small tree frogs in the genus Eleutherodactylus, which encompasses some 200 species, dominate the Caribbean today.  Coquís differ from most other frogs as they usually do not lay their eggs in water.  They do not have a hatching tadpole stage, instead the tadpole stage takes place within the egg, the male carefully tending the nest and ensuring that the eggs remain moist.  When the eggs hatch, the young emerge as fully formed froglets.

A Male Coquí Frog Protecting a Clutch of Eggs A male coquí frog protecting a clutch of eggs.

Everything Dinosaur acknowledges the assistance of a media release from the University of Florida in the compilation of this article.