The progress of Abinader: 14 days of plans and revelations for the Dominican Republic 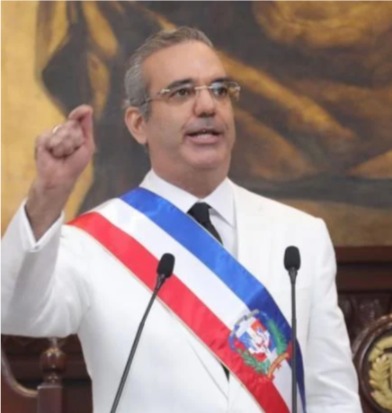 In his second week in office, President Luis Abinader has presented plans for education regarding the beginning of the school year, as well as strategies for the recovery of tourism, which has been severely hit by Covid-19, in addition to other measures for the health sector.

Last Monday, Abinader, together with his Minister of Education, Roberto Fulcar, reported that the classes for the 2020-2021 school year would begin on November 2 under the virtual modality, after the educational period was in danger due to the situation that prevails in the country due to Covid-19.

However, Fulcar revealed this week that the process of acquiring more computers and tablets to serve the 2.8 million students would take longer than the schedule at the beginning of the school year.

The president has committed to providing public education teachers with the appropriate technological tools, including tablets or computers, to develop their teaching processes with the programs, materials, and resources necessary to ensure the success of education.

Regarding tourism, the president reported Tuesday that among the measures are the investment of 420 million pesos in promotion and agreements with airlines to ensure routes, economic support, fiscal flexibility, monetary measures, a guarantee fund, credit support for the small and medium-sized companies, and the creation of health insurance in charge of the state for tourists who may be affected by Covid-19.

“We have decided not to ask travelers for any test before entering the country. We will not be conducting massive tests upon arrival either, but rather quickly applied random tests. In this way, we will guarantee that the available tests are used by those who need it most, especially the most critical cases,” explained Abinader during the launch of the Responsible Recovery Plan for the Tourism Sector.

Also, he said that in dialogue with the sector, measures have been taken as of September 1 and cited the reduction for the September-November period of the APA rate to 35%; elimination of the advance payment for six months; elimination of a charge of 1% of assets until June 2021.

He also indicated that the extension for two years of the beginning and end of the projects approved by Confotur. “This is done without neglecting the necessary monetary and financial measures, and we are working hand in hand with the Central Bank to continue enabling small and medium-sized companies to have the necessary liquidity to overcome this crisis,” he added.

Signs
Last Wednesday, Abinader revealed that there is no information on inventory, debts, payments, and purchases in the Social Plan of the Presidency, because they took all the hard drives of the computers and left them empty, so there is an ongoing investigation.

While in the case of the Essential Medicines Program and Central Logistics Support (Promese/Cal), they blocked the computer system.

From Promese/Cal, Vice President Raquel Peña expressed that they have not been able to access any administrative, operational, and accounting information, nor is it known how much material there is, how many medicines there are, what the state of purchases is, and other tasks.

President Abinader said that this situation had forced the personnel to work manually, which has been a slow and challenging job since a person put a password into the system, and it is not known who they are and where to find it.

The health sector
A recent measure to confront Covid-19 was the declaration of emergency for purchases and contracting of medicines and supplies to face the pandemic.

The measure is contained in decree number 401-20, which also includes the purchase of other related goods and services “that are essential to continue with the mitigation and prevention initiatives against Covid-19.”

For such purposes, the same decree authorizes four institutions: The Ministry of Public Health, the National Health Service (SNS), the Program of Essential Medicines and Central Logistics Support (Promesecal), and the Autonomous University of Santo Domingo ( UASD).

Criticisms
This Friday, the Chamber of Deputies approved in two consecutive readings the project that modifies article 7 of Law 5994, of December 1, 1962, which creates the National Institute of Potable Waters and Sewers (Inapa), so that Wellington Arnaud may be appointed as executive director of that institution.

This article states that “the executive director of Inapa, whose remuneration will be set by the Executive Power, will be the legal representative and executive body of the Board of Directors and must be a Civil Engineer with a degree of specialization in Sanitary Engineering.”

So far, Abinader has not issued a decree that designates the former deputy as director of Inapa, however in the social networks of that institution; they indicate him as the executive director, who has kept working since last August 17 as the person in charge of that dependence on the state.

However, the president of the Dominican Council of Engineers, Architects, and Surveyors (CODIA), Francisco Marte, described the modification of article 7 of Law 5994, of December 1, 1962, as a “backstabbing” for engineering professionals, which creates Inapa, so that Arnaud can be appointed as executive director of that institution.

He understands that the action shows the weakness of the institutions, where group interests are placed above the common good.