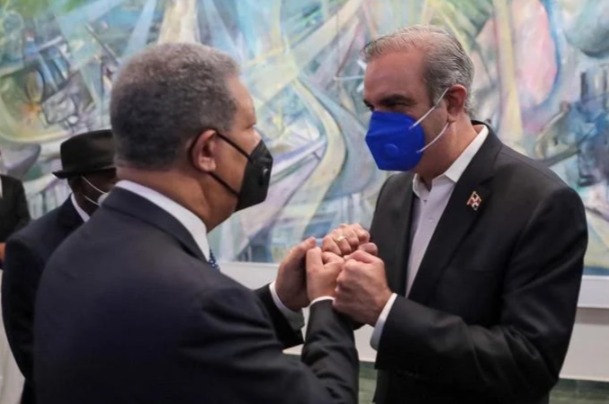 With the pan firmly grasped by its handle, President Luis Abinader takes advantage of the honeymoon with opposition politicians and parties. He is buying time for a dialogue that could benefit the country in times of coronavirus and economic crisis.

Bringing together old adversaries and opponents such as former President Medina, former President Fernández, and former presidential candidate Guillermo Moreno, around the same cause, gave the new president quite a field to his initiative.

Abinader allegedly proposed an agreement with political forces and other sectors to address the country’s problems very early in his campaign, which presented him as a compromising politician who did not want acrimonies if he won, but rather to get along with everyone.

His control of the situation in moments of discouragement and drowsiness among many Dominicans due to the pandemic also strengthens his moral quality if he had to adopt more energetic measures in the face of an evil that does not yield to lack of discipline.

The visits on Thursday, when Abinader descended from the National Palace to find Medina, Fernández, and Moreno in their places of office, does not mean that later there will be persecutions derived from audits for acts of corruption. Abinader has yet to meet with other political leaders of parties smaller than that of the Dominican Liberation and Alianza País, which also helps him be seen as a man respectful of the minorities he might need in Congress. The business sectors that claim to be severely affected by the six-month pandemic and four months of the closure of all non-essential businesses and civil society members would also be in turn for the presidential meetings.

It could be said that things are going well for the government in whose curriculum no public function appears already through the Executive Branch or Congress. His sights were always set on winning the Presidency as he quickly achieved it.

Abinader has had a different behavior than the previous presidents. That is why last weekend she went to Pedernales with her family for a couple of days of work and relaxation, but mostly to draw attention to that region’s beauties.

After the corruption in recent governments, many of those who supported him before and during the campaign and those who lashed out at Medina and Fernández without compassion, all of which redounded to the benefit of the Abinader candidacy.

The prosecution of corruption now has sufficient public support. Many believe that in the end, as in previous governments, everything will be left to hope, but Abinader has said that there will be no “clean slate.”

The appointment of the attorney general, Miriam Germán, and her deputy, Yeny Berenice Reynoso, points out that a hard-line reached a position that in the past was the subject of negotiations and settlements in cases as serious as money laundering and drug trafficking.

When swearing in the two magistrates, Abinader said that they should act freely and only obey the Republic’s Constitution. The first thing Magistrate Germán did was replace a group of seemingly unreliable auxiliary attorneys.

The president “was cured in health” so that no one goes to his office or tells him to intervene for someone because he already anticipated that the two attorneys would act free and obedient only to the Constitution.

As always, the lawyers disagreed as to whether the audits made by the General Comptroller’s Office would be valid for corruption processes, or if they could only serve as the basis for the investigations that the Chamber of Accounts is supposed to carry out.

The Office of the Attorney General has pending cases from the past such as ODEBRECHT, OISOE, and OMSA, three “ñáñaras” that are still in court. There are other cases of corruption and administrative implications that have come to light after the change.

There are also several hundred supernumerary employees in various state offices who will be disengaged as the job market suffers the pandemic crisis. With many party heads waiting, Abinader would have no excuses.

Little had happened to the expectations the adversaries expected when they reached the government.

The shouts of “go away” that were launched by crowds throughout the country in the electoral campaign when they saw that the Medina regime was ending were not only directed at the official candidacy but also at the officials who forgot to help the base.

The abandonment of the “companions” by officials who took up positions with the idea that they would last a lifetime was something they had saved as a “B” plan that the PLD’s party leadership did not capture.

The Central Bank reported on Thursday that private credit in the national currency has grown above RD $ 40,000 million since the start of the pandemic. Yesterday, the Minister of Economic, Miguel Ceara Hatton, anticipated a “relative recovery.”

The BC cites that, like other banks in the world, it has acted proactively so that its “expansive stance has been reflected in the reduction of 150 basis points in the monetary policy rate since March, reaching its all-time low of 3.00% annually.

Despite the pandemic, the institution observes a revitalization of credit to the private sector in national currency, which is the variable on which monetary policy has the most significant impact. Personal loans in national currency have maintained their growth.

In another report, the BC states that according to preliminary data, the economy fell by 8.5%, 50 points lowered the interest rate from 3.50% to 3.00%. It draws attention to the high uncertainty in the international environment, pending the global recovery and control of the pandemic.