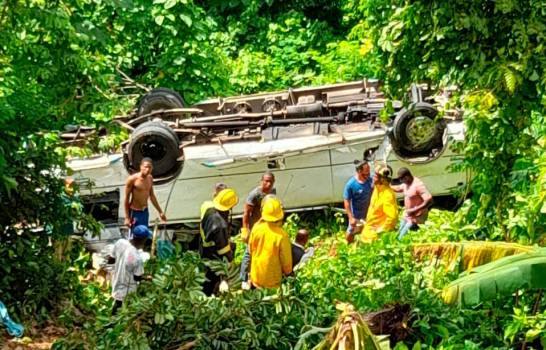 The General Directorate of Traffic Safety and Land Transport (Digesett) informed Diario Libre that among the 17 victims of the traffic accident on the Sánchez-Samaná highway, three are Venezuelans, one is Colombian, and the rest are Dominican, including two minors.

According to unofficial information, these are en route to the El Limón waterfall, in Samaná.

The wounded were diagnosed with multiple injuries and cuts, and transferred to the Samaná provincial hospital, Leopoldo Pou, and the Alberto Gautreaux municipal district hospital in Sánchez. So far, 15 people have been identified.

Also injured in this accident was the American citizen Aleisha Cross (24).

Ramón Encarnación (49) is identified as the driver of the Mitsubishi Rosa model bus.

The National System of Attention to Emergencies and Security 9-1-1 reported that 11 units of the response institutions that make up the organization participated in the accident that occurred this Tuesday morning in the Majagual of Samaná province.

The event reportedly occurred when the bus they were traveling in lost control while climbing a hill, overturning into a ravine.

The assistance operation at the scene was attended by seven ambulances from the National Health Service (SNS), which took nine of the people to the nearest hospitals. The Fire Department, the National Police, the General Directorate for Traffic Safety and Land Transport (DIGESETT), and the Ministry of Public Works and Communications (MOPC) also assisted.

9-1-1 revealed that the call was received at 9:34 am, and response units were dispatched immediately. These withdrew from the event when the assistance to the people concluded, closing the case at 12:10 pm