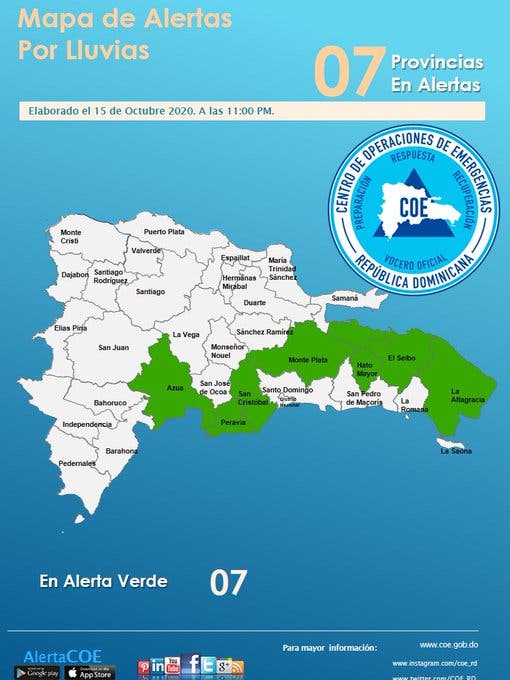 A tropical wave that is currently moving over the eastern part of the country, is interacting with a trough over Puerto Rico. The resulting cloudiness is being carried by the east wind over the national territory, both phenomena will cause the development of afternoon clouds with downpours or scattered showers that can be moderate to strong with thunderstorms and isolated wind gusts over several provinces of the regions; east, northeast, southeast (including Greater Santo Domingo) Cordillera Central and the border area. In addition, temperatures will be slightly warm.

Due to the rains that have occurred and those that are expected, ONAMET issues a weather alert level in case of possible sudden or gradual urban floods, as well as overflowing rivers, streams, and creeks for the following provinces: (See table).

The Emergency Operations Center (COE) reported today that seven provinces are on green alert for possible urban and rural flash floods, flooding of rivers, streams, and ravines, as well as landslides.

¨The #COE emits green alert for seven provinces for possible urban and rural flash floods, river floods you, streams and gullies, and landslides, the center posted the entity on its Twitter account.