Abinader on Operation Falcon: “In this country you commit crime, you pay” 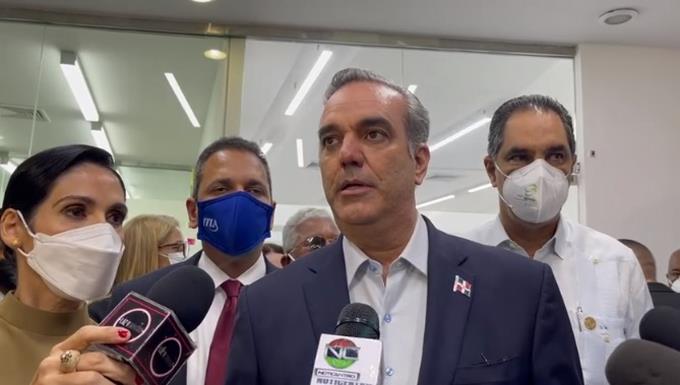 In a fulminating action, in line with his promise not to allow the image of his government and the honor of the country to be tarnished by inappropriate practices, President Luis Abinader yesterday suspended Juan Maldonado Castro, director of Comunidad Digna, for involvement in illicit activities, thus becoming the ninth official to be suspended or removed from office.

“In this country there are no longer sacred cows. In this country, whoever does it pays for it. Justice will be in charge of determining,” he added.

In this regard, he said that he is now waiting for the National Drug Control Directorate (DNCD) and the Attorney General’s Office to give full details of this entire operation.

Luis Abinader answered questions from journalists about the case in which Juan Maldonado Castro was arrested for his alleged involvement in drug trafficking and money laundering. Minutes before his statements, Abinader had provisionally suspended Maldonado Castro through decree 550-21. “That is a sacred commitment that I have with our country, to put an end to many decades, both in administrative corruption and organized crime that existed, which was impunity and protection. That no longer exists in the Dominican Republic,” he said.

The former Minister of Youth, Kinberly Taveras, was cited for the first scandal of alleged irregularities in the management of public funds while she was the director of the Municipal District of La Guayiga.

Early yesterday morning, Wednesday, the action began with 60 prosecutors to certify 80 raids in several jurisdictions, including the National District, and more than 200 anti-narcotics agents to guard its operations.

The MP assured that this network operated in the northern part of the country, especially in Santiago, but with ramifications in the eastern region of the country and that those involved were dedicated to laundering money resulting in illicit profit for moving large shipments of drugs coming from South America, especially from Colombia and Venezuela, to the Dominican Republic, to ultimately deliver to the United States, Puerto Rico and Europe, “using speedboats, sport boats (double bottom), fishing boats and containers.”

In February 2019, individuals linked to the network had 254 packages of cocaine seized on the Coral Highway road section, between the Coral II Toll Station and the traffic circle in the Veron-Punta Cana municipal district. Those arrested are linked to the drug trafficking network from which 1,050 packages of cocaine were seized in March 2019 in the speedboat that was adrift for lack of fuel about 50 nautical miles north of Puerto Rico.

“Certainly, the Public Prosecutor’s Office, in coordination with the National Drug Control Directorate, and the support of the DEA, has conducted several months of a fairly complex investigation that includes about nine provinces of the country in which we have had to scour to make approximately 86 raids preliminarily,” specified Yeni Berenice Reynoso.

She added that they had seized many pieces of evidence, among them “exorbitant” amounts of dollars that she did not want to specify for the moment because the raids are in process.

Reynoso described the operation as one of the most critical operations against money laundering in the country. She further explained that the investigation involves the arrest of extraditable persons and that others accused will be prosecuted by the Santiago Prosecutor’s Office.

who is the author of this piece?