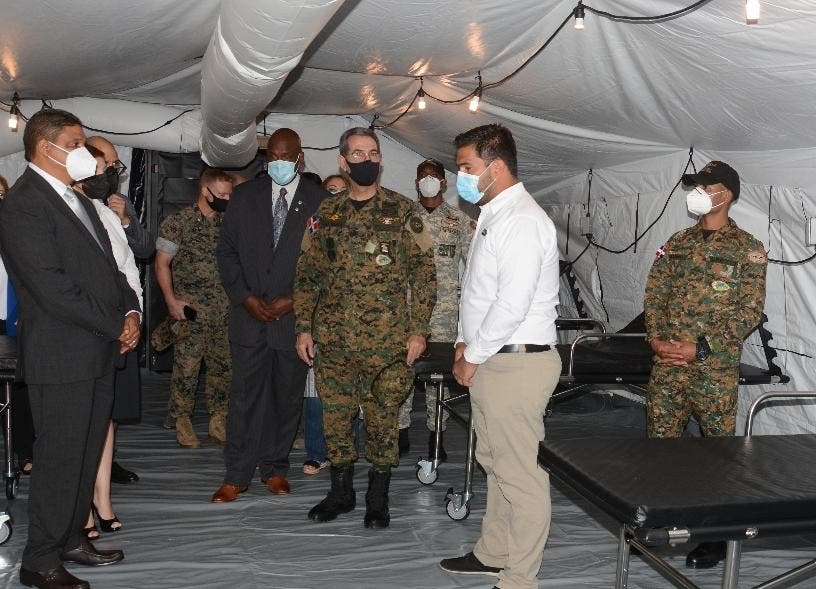 The country The Minister of Defense, Lieutenant General Carlos Luciano Díaz Morfa, after participating in an act of donation of three mobile hospitals to the country by the United States government, in photo Juan Manuel Méndez García, director of the COE, Kevin J . Bostick, Director of Exercises and Coalition Affairs of the Southern Command .. Today / Pablo Matos 12-10-2021

Mobile hospitals would be placed in places more vulnerable to emergencies, received the director of the COE.

The United States Government, through the Southern Command, donated three mobile hospitals consisting of nine modules, with 40 stretchers each for hospital care, to the Emergency Operations Center (COE), which places the Dominican Republic in first place in the region, in terms of mitigation and emergency responses.

These mobile hospitals will increase the capacity of the Dominican Government to offer emergency assistance during response operations to disasters or health crises.

These infrastructures have three pavilions of rapid deployment that allow attending to any emergency in minutes. Another six can be alternative places for long-term medical care.
Each hospital has an electrical system with two 70 KBA generators, nine air conditioners, a water system, seven sinks, and two showers.

During the donation ceremony, Kevin J Bostick, Director of Exercises and Coalition Affairs for the United States Southern Command, said that “The United States strongly believes that the collective safety of our friends promotes our safety.

“The United States and the Dominican Republic share our firm commitment to democracy and, due to the ties that unite our peoples, through decades of travel, immigration, trade and security, we are proud to support our friends,” he said.

On his side, the director of the Emergency Operations Center (COE), Juan Manuel Méndez García, received donations from the Dominican Government.

In the same way, he expressed his gratitude to the Southern Command.

On behalf of DR
Thank the US for the donation

Brotherhood is strengthened
The director of the COE, Juan Manuel Méndez García, said that “on behalf of President Luis Abinader I appreciate the donation of these three mobile hospitals and medical equipment that, without a doubt, will strengthen inter-institutional cooperation and the spirit of brotherhood between both peoples.”