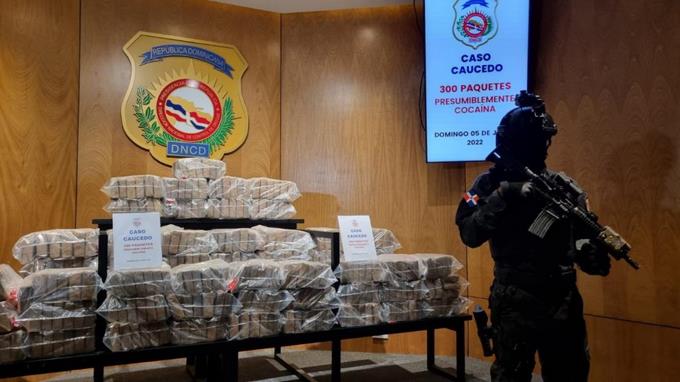 Santo Domingo, DR
The National Drug Control Directorate (DNCD) seized 300 packages, presumably cocaine, in the middle of an inspection operation carried out this Saturday at the Multimodal Port of Caucedo.

The anti-narcotics agents, canine units, and military personnel stationed at the port profiled dozens of containers in transit through the country. After a more rigorous verification, six bales were found in one containing 50 packages each for 300.

Military Security, intelligence agencies, and under the coordination of the Public Prosecutor’s Office, participated in the operation as part of the reinforcement in the persecution and fight against drug trafficking.

According to the cargo manifest, the container loaded with refrigerated apples arrived at the port of Caucedo from Chile in transit, and its final destination was Rotterdam, Netherlands. The Public Prosecutor’s Office and the DNCD have initiated an investigation concerning the shipment’s frustrated shipment to Europe, and as the investigation progresses, further details will be provided.

The 300 packages seized in this new operation were sent under chain of custody to the National Institute of Forensic Sciences (INACIF), which will determine in its analysis the exact type and weight of the substance.

The authorities have continued to strike significant blows against drug trafficking networks that try to use Dominican territory for their criminal activities. In the first five months of this year, the DNCD, with the support of the Armed Forces, the Attorney General’s Office, the Police, and State Intelligence agencies, have seized 17,875 kilograms (17.8 tons) of different drugs.

“The DNCD under the leadership of the central government ratifies its unwavering commitment to continue confronting drug trafficking with determination and firmness.”