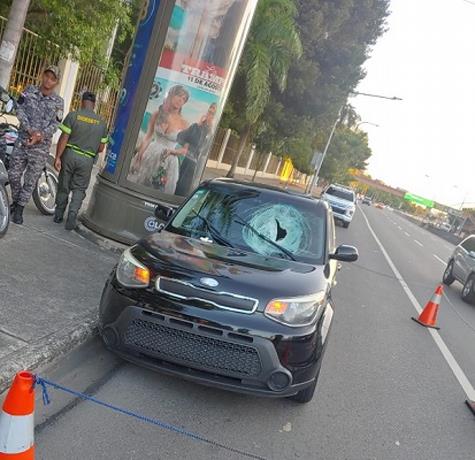 According to police, several people have been detained in connection with the early Sunday incident in which an individual threw a stone from the pedestrian bridge on Avenida 27 de Febrero, corner of Máximo Gómez, hitting the front window of a vehicle and killing him, Diego Pesqueira, a spokesman for the National Police confirmed. He stated that the case is still being investigated and that the agents are still reviewing the security cameras in the area where the incident occurred.

The perpetrator of the crime, who has not yet been named, threw the stone that struck Joel Rafael Cabrera Espino, 28, killing him, according to the National Police’s preliminary report. The unknown man then proceeded to walk down 27 de Febrero Avenue towards Tiradentes Avenue. A source revealed to this medium that there is an audiovisual that captured the moment the individual committed the act, in which his identity and physical appearance can be found.

Pesqueira, on the other hand, stated that there are several detainees for investigation purposes due to their possible connection to another similar event that occurred on John F. Kennedy Avenue, where a citizen reported that his vehicle was hit with a block thrown from the bridge.