Estrellas overcome Águilas and go to the final with the Gigantes 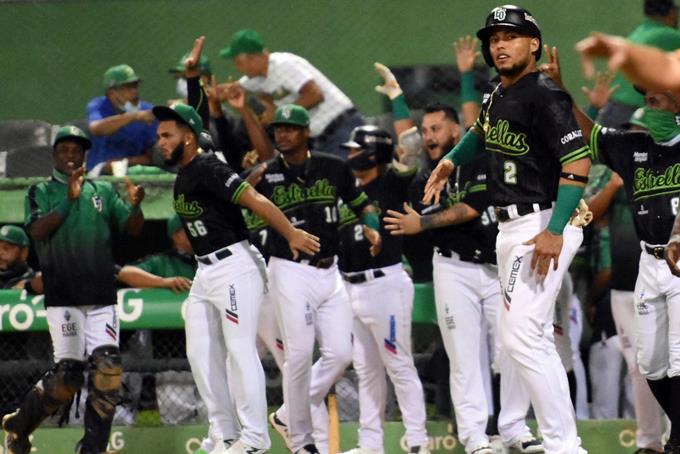 The players of the Estrellas celebrate their passage to the final series of the tournament after defeating the Águilas.

San Pedro de Macorìs
This Saturday, the Estrellas advanced to the final series of the 2021-2022 autumn- winter baseball tournament, which starts this Monday by beating the Águilas Cibaeñas 11-4 at the Tetelo Vargas Stadium in this city.

The Estrellas will face the Gigantes del Cibao, who beat the Tigres del Licey 4-3 at the Estadio Julián Javier in San Francisco de Macorís.

Although both teams finished with an identical 10-6 record at the top of the standings, the green team won the Round Robin by winning the series 3-2 over the Colts, giving them the right to start Monday’s 7-4 final at the Tetelo Vargas Stadium, as well as to choose first in the draw for the re-entry of imported players on Sunday.

Each team will have to select two reinforcements from both Aguilas and Licey. They, in turn, will replace two of the already qualified teams for the last leg of the championship, which is dedicated to the memory of General Kalil Haché Malkum, in option for the Banreservas Cup.

Likewise, it will be the second time that both Estrellas and Gigantes will face each other in a final. The first time was in the 2014-2015 season when the team from the city of the “Jaya” won the Cup.

The game was won by Samuel Zazueta (2-0), who pitched two and third quality innings with only two hits and four strikeouts, while the setback went to Cristopher Molina (0-1).

The Águilas were the first to put numbers on the board with four runs, a Cristhian Adames single through right field, and a Deivi Grullón single through left field. Eric Filia was transferred with the bases loaded, which caused García to leave the mound and was replaced by Pimentel, who gave bases on balls to Jimmy Paredes.

At the end of the fifth inning, the Estrellas tied the game at four runs apiece. First, Jeremy Peña, with a two-run single to right-field; Gustavo Núñez failed with a ground ball to the pitcher, a situation that Peña took advantage of to score, while Robinson Canó evened the score with a hit to center field.

In the seventh, the green troops took control of the game by scoring four runs. Junior Lake hit a line drive to the center field, producing a homer; Yamaico Navarro hit a two-run homer to left field, and George Valera hit a ground ball that middle infielder Luis González missed, which Elehuris Montero took advantage of to score from third.

In the bottom of the eighth, the Estrellas continued with their offensive attack against the Aguilas’ pitching with three more runs, the first by Montero’s hit to the center field and a double of two more Abraham Almonte to the center-field wall.