Dominican Republic triumphs and will face Mexico in the semifinals 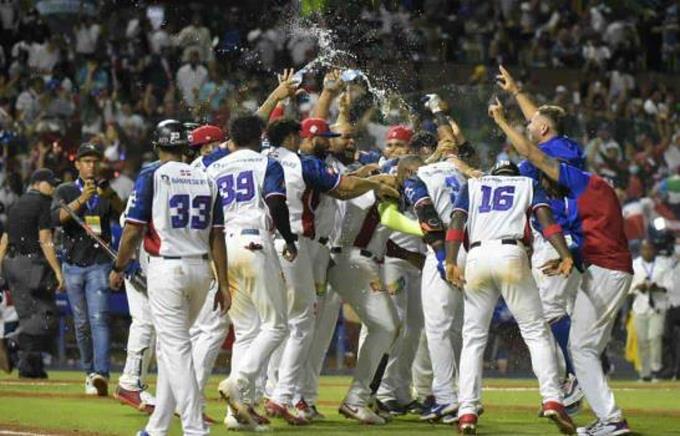 Players of the Giants of the Dominican Republic celebrate after defeating Venezuela.

SANTO DOMINGO
The regular stage of the Caribbean Series 2022 came to an end. The Dominican Republic and Venezuela gave us an electrifying game at the Quisqueya Stadium that was decided in the tenth inning thanks to a sacrifice fly to right field by Hanser Alberto that produced the winning run, eight runs against 7. The Dominican Republic secured first place in the regular stage and will face Mexico in the semifinals. Venezuela will face Colombia.

The defining moment was in the bottom of the tenth inning; Melky Mesa started running as a pinch hitter at second base as part of the sudden death rule. Danny Rondón entered the relay. Webster Rivas sacrificed and advanced Mesa to third, Richard Ureña was intentionally walked, José Siri was hit to load the bases, and with one out, Hanser Alberto flied deep to right to drive in Mesa with the run that gave him the Dominican victory.

In the third inning, the home squad opened the board. Marcell Ozuna received a walk, and Kelvin Gutiérrez hit a double with one out. With the table served, Juan Francisco got a hit to right field driving Ozuna, in on the play, Gutiérrez scored on an error by the first baseman.

In the fifth inning, Richard Ureña hit a single to right field with one out, and then José Siri hit a triple to center to drive in Ureña with the third Dominican run.

In the sixth, the scoreboard was extended. With one out, Carlos Paulino received reliever Jose Manuel Martinez with a two-run double. Paulino scored with a hit by Richar Urena to advance the scoreboard to six to zero.

Niuman Romero drove in Gabriel Noriega with the first run, Williams Astudillo towed in Alejandro de Aza, with the bases loaded, Balbino Fuenmayor hit a double and produced two more. In contrast, Pablo Sandoval drove in the fifth rally run with a ground ball to second. The inning ended with a double play, Ángel Reyes singled to right field, and Fuenmayor was put out at the plate.

The turnaround came in the eighth inning. A single by Williams Astudillo drove in Francisco Arcia with the tying run, and Danry Vásquez with a single to center brought in Niuman Romero in the seventh for six.

The seven-run tie fell in the eighth inning, Hanser Alberto hit a sacrifice fly to right field, Gustavo Nuñez scored on a ground out. The game was decided in the bottom of the tenth inning.

Albert Abreu started and left for the Dominican Republic with a no-decision after not completing five innings, and he worked four and two-thirds innings with six hits and no runs. Frank Garcés relieved him. Ryan Kussmaul followed him for two-thirds. Huascar Brazobán and Luis Santos got no outs, Brazobán got three runs and Santos two. Luis Castillo one inning, Yeimín Guduán allowed two runs in six innings. Jenry Mejía worked three innings. Juan Minaya retired the ninth. Fernando Abad (1-0) got the win when he played the tenth inning.