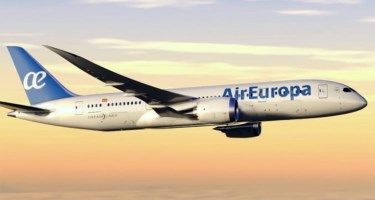 IT WILL OPERATE THREE WEEKLY FLIGHTS TO SANTO DOMINGO

Air Europa plans to return to Punta Cana on October 3 with a weekly flight, and from November to add a few more flights per week until the end of the winter season in May 2021. This news is according to the provisional schedules of the Globalia airline, which has had to ask for a rescue of public money to the Spanish Government since the banks do not give him more credit.

Air Europa will also have Santo Domingo as its Latin destination with the most weekly flights during September from its Madrid base, with three operations a week this month, operated in its most modern aircraft, the Boeing 787 Dreamliner.

The rest of the international destinations where the airline has programming in September, according to arecoa.com, are Sao Paulo and Quito, with two weekly flights. There are also Bogotá, Buenos Aires, Lima, Medellin, Miami, Montevideo, New York, San Pedro Sula, Santa Cruz, Tel Aviv, and a Tunisia weekly flight scheduled.

The 400 million euros that Air Europa has requested from the Government will have to be translated into a reduction similar to the price that Globalia asks Iberia for selling its airline since IAG will have to pay back that amount if it ends up buying from the Hidalgo airline company.

And together with this discount, the depreciation will also take into account that the potential to generate profits in the coming years has been significantly reduced, given the drop in demand. The still president of IAG, Antonio Vázquez, reminded his shareholders that Iberia is negotiating with Globalia a restructuring of the agreement.

Vázques focused on lowering the price of the acquisition and also on “the financing needs of Air Europa’s business” after requesting, together with the rescue of 400 million from the Government, also a recent ICO loan of 140 million that has been insufficient for your liquidity needs to avoid bankruptcy.

IAG has devalued on the stock market by 72 percent in recent months, in the same way as the rest of the European airline giants has done. So it considers that Air Europa’s valuation should also consider a similar depreciation compared to billions agreed on last November. Along with this price reduction, we should also add the new and bulky debts that Globalia’s airline has had to incur to survive.