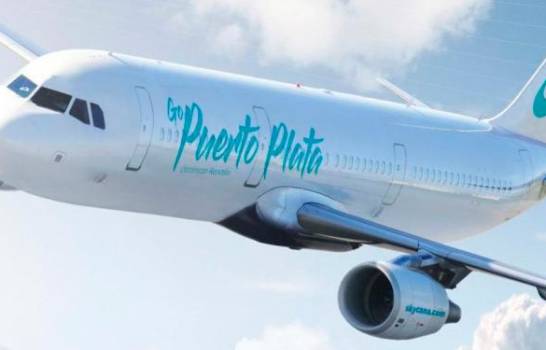 New York.- The new Sky Cana airline of Dominican investment, was officially presented this week, and its president, Frank Díaz, announced that the company will offer low rates on flights, will not charge for the first suitcase or for the handhelds, and will serve Dominican food.

The event was held at the Riu Plaza hotel in Times Square in Manhattan.

Díaz, accompanied by the entire airline operating team, said Sky Cana will begin its routes to Santiago and Santo Domingo on December 2, 2021 with two daily flights operated by Air Century.

Come to Baltimore or Washington with direct flight to Puerta Plata. Already have direct to Punta Cana but North Shore needs one from Baltimore/DC.

I swear the people (or person) who run Dominican Today are retarded. The photo of the airplane clearly says “Go Puerto Plata” and the airline will service Santiago and Santo Domingo. WTF?

They are promoting the tourism in DR. There is nothing wrong with that. If I am not mistaken the company has three planes, with Punta Cana Logo, Puerto Plata, and Samana which are cities with the most tourists.

Exactly 👌🏼 I have family over there

Good response to the heaters buddy

You might be more because its a promotional phrase its not a literal plane that only goes to one city. The airline already flies to most airports in DR there just adding a new route from New York.

You can’t promote something that doesn’t exist. The headline was clear that it was Santiago and Santo Domingo , never said Puerto plata. A lot of ya Dominicans are quick to judge people on social media but can’t even vote for a decent presidential candidate right 💩

The planes will have differents slogans,go Santo Domingo and go santiago

It’s a gray news for the passages.

Great news for the country and the people there and abroad

Will it fly out of Florida

Great news about time thanks

What airports will it be flying from…please let it fly from Philadelphia international…we have a big need here.

It is about time that we get an airline.

This will stop the abusive fares that JetBlue and Delta plus other airlines have for flying to DR.

I love it. I will support 100% a project like that booking with that airline.

Clapping my hands and staying clear using this airplane is all I am saying!

Hi…. ,I,m very happy hat is about time we have a Dominican airline ,that we Dominican can fly with out any discriminations and abuse..,I hope that we can keep it for long time without any problems.ànother thing about food is not that we going to be crazy for food and I, understand if we got ours Dominican food curse that we going to be happy….another thing is that the long this àirline keep up a good prices and I, hope they keep it., because more Dominican like me make plans to visit ours beautiful country…keep it up

They will have teteo and hookah next. Lmao

This is very good news,i am very sad that they will not fly from the ewr,newark aiport.If they are fly from NJ i will never use Jetblue and United airlines again.They abusing their customers with stupid fees.

Be warned , never book or travel via ANY Dominican Republic Airlines. THEY ALL FAIL. If they need to cancel a flight, no compensationes given. If a Dominican Airlines losses you luggage-that’s it, don’t expect to be compensated. The lists goes on and on with there terrible service. The last Dominican Airlines which folded around 2 years ago, left everyone with paid ticketed airfares hanging. .. they were still making bookings flights up the the night before they officially announced bankruptcy.

I am talking from about 38 yrs past experience. By 1983 l said no more and never again traveled with an Dominican Republic airline carrier.

Wow!!! you stuck on the 80s this is 2021 give them a chance and see how is going to go. Don’t judge before things happens By the way there are other airlines you don’t have to use their planes.

You get, what you paid for!!

We wanted our own airline , now we have it . It is up to us LA DIASPORA to support it. ASI SE HACE PATRIA

I would like to know this airline phone number

Glad to hear about this new plane

im trying to book for december

The aircrafts will soon be pile with idiots on every flight ….. that’s a fact lmao

What web page tO book???

Love to hear more about this airline. Im in out the DR alot, Santo Domingo , central part of the island Moca, Santiago & Puerto plata

Come to Philadelphia or Baltimore