Nonsense to want to close JetBlue 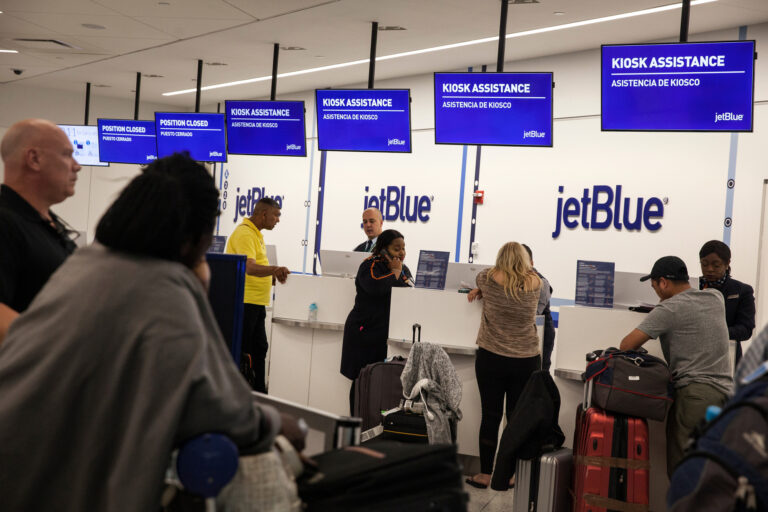 Travelers stand in a ticketing line during Winter Storm Quinn at John F. Kennedy International Airport (JFK) in New York, U.S., on Wednesday, March 7, 2018. New York will be hit with the heaviest snow on Wednesday afternoon from a storm that's already grounded almost 2,000 flights and could cut power to many in the Northeast who just had their service restored after an earlier winter blast. Photographer: Holly Pickett/Bloomberg

Those in power never cease to surprise public opinion. The proposal of the president of the Chamber of Deputies to shut down JetBlue Airlines for its bad onboard experience is yet another exaggeration by politicians who think they are the masters of the country.

JetBlue is an airline that has been generating problems for a long time, is not an example of professionalism, and makes mistakes regularly. But to go so far as to close it down is nonsense.

The tourism sector, more specifically the aeronautical sector, has already expressed its opinion on ceasing operations. An airline cannot be closed as easily as if it were a place where adulterated alcohol is sold.

What the Government (aeronautical authorities and Mitur) has to do is that this company fulfills the requirements established by the laws. And if they have committed excesses, which it seems they have, fine them repeatedly so that the mistakes are not repeated.

JetBlue’s owners do not force passengers to fly JetBlue. Unfortunately, travelers prioritize price over good service and quality, which is the detriment that cheap is sometimes expensive. DR cannot do without JetBlue today. In the medium term, it could, but not today.

I just hosted a group of 15 who flew down from Newark this week. I asked them if they had any issues or witnessed anyone having issues. Easy flight, aside from being delayed 30 minutes.

I am not sure what Utopian world this official lives in to think that only one nationality of people are being inconvenienced by delays and cancellations. Maybe he should read the news of the world a bit more often.

It is nonsense to close JetBlue. They apologized for their lapses. The politicians. Mitur, and Pro Consumidor are thumping their chests to think their threat of shutting down JetBlue’s access to the RD will bring about the changes desired. If they expel JetBlue, then they will have to expel many other airlines servicing the RD because they commit the same gaffes as JetBlue. Gaffes brought about because of airline shortfalls of staffing has placed stresses on them to return to the better pre pandemic operations environment.

Secondly, seasoned travelers know what to expect during these trying times and have adjusted as best they can to accept the inconveniences, going with the flow, all knowing what the stresses airlines are going through to move them about. This not to say airlines can be vulgar. Seasoned travelers know what vulgar is and will speak up. Some uneducated Dominican travelers can be trying on crews, ground services, and airport gov’t agencies, Yes, they too can be rude. Most, if not all the airport and airline support people will try their best to assist and communicate with the traveling public. The Dominicans have to get tougher skins for the time being.

Closing JetBlue is a punishment not justified for its offenses. Fines or changing times of air slots (airline time operating rights at an airport) would be examples of penalties. JetBlue does need to improve. It has to come soon.

jetblue should be shutdown, period.

I travel to Santo Domingo from Florida at least twice a year on JetBlue. I have had great flights, delayed flights and cancelled flights. Never have I had anyone be rude or inconsiderate. However, I have had announcements made only in Spanish at the airports. I have seen the chaos of far too many wheel chairs . There seems to be a meme going around that only Dominicans are inconvenienced . Nonsense, when my flights are delayed it’s not MY flight it’s everyone on the same plane. I wonder what the DR. would do if half the tourists suddenly were unable to come. Politicians need to get a life and not grandstand. By the way, JetBlue is an American Flag carrier does the American Embassy have an opinion on arbitrary cessation of an American company doing business in the country – oh, by the way they’re about to buy Spirit.