One dead, 15 hurt in 3-bus pileup on scenic road 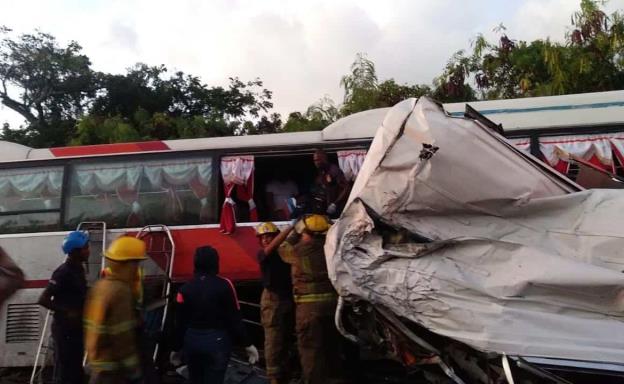 Lieutenant Guarionex Valenzuela, in charge of the Digesett Procedures in Bávaro, maintained that the accident occurred on the Bávaro Macao-Miches highway, two kilometers after the Hard Rock Hotel, Punta Cana.

The buses involved are one from Transporte Bule (Bule Hotel and Tourist Personnel Company, SRL), another from Bahía Príncipe personnel transport and another that was possibly carrying tourists, Valenzuela said

This is not surprising. They all drive like maniacs here. Until Amet start fining all the infractions that occur evey day nothing will change. But if a bunch of tourists get hurt watch MSM damage tourism again.

If you are referring MSM as mainstream media please be kind to explain how it damages tourism. It is the maniacs, they are the ones who are damaging tourism, cannot sweep their behaviors under the rug.

Maniacs is the word!

YELLOW BUSES ! AGAIN ! AUTOBUSES AMARILLOS PERSONAL TRANSPORT ! IS NO MADE POR THAT !

May the driver RIP.

It is a damn shame this accident happened, many injured and one dead.

Many coach drivers with the complicity of their employers operate their vehicles carelessly. High speed, tailgating, imprudent passing, and quick lane changes in close proximity of other traffic is a norm in the east. More trips equal more money. Hell with safety !!!!

Faster is better…nothing is going to change…unless mentality changes first…unfortunatly there is no remedy….Drive slower so you can get on time wherever you going…!!!

This should never be a question of why this happened, but when it will happen again. When I see the word Bule in my mirror, it is only for a second. After that he is so damned close to the back of me, I can only see grille, without headlights. These guys are the epitome of bad driving. As soon as I heard one was involved in the collision (NO ACCIDENT!!!), I figured out pretty quickly who caused all of this.

Now, Paul said AMET (or whatever they are called this week) has to start dealing with these idiots. That would take away from their constant “tax” collecting as they stand in the middle of the lane and pulling random people over who are in the proper lane, doing the posted speed limit (as they attempted yet again with me yesterday on that same stretch of road).

If they say they have no vehicles to do so…tell you what! I will volunteer 2 days a week of my time to drive an Amet officer on these roads and when I see an obvious infraction, give him the chance to ticket that driver (and I do not mean the 1000 peso tickets). Charge them with “wreckless driving” and take away their right to do so for a few months.