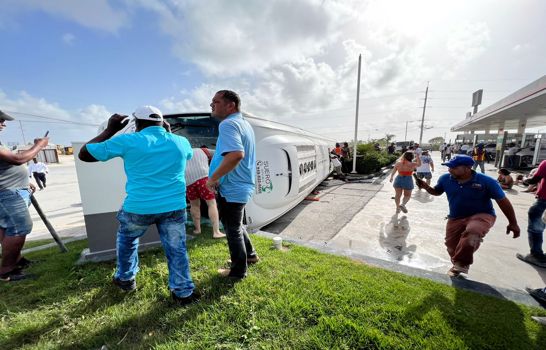 An accident that happened this Thursday on the Boulevard Touristico in Bávaro, has so far resulted in three fatalities and more than 40 injuries. According to communicator Fernando Placeres, the fatal incident happened when a bus carrying tourists of different nationalities was departing from Bávaro direction Punta Cana International Airport when a truck crossed in front of Plaza Coco Bongo, forcing the driver to make a turn that ultimately resulted in the passenger vehicle flipping.

Preliminary information indicates that the tourists were driven by bus to Bayahibe, on an excursion to Saona Island. A collision happened at the Domingo Maz Crossing. Nearly 50 passengers from various nations, including Colombians, Brazilians, Chileans, Peruvians, Argentines, and Mexicans, were being taken on the bus. At least 15 tourists are admitted to medical facilities for sensitive reasons. The rest are solid.

According to the early account of the incident, the bus slipped off the road and caused the incident. David Collado, the minister of tourism, expressed his regret and shock over the incident. Collado announced via his Twitter account that he visited the hospitals where the victims were sent to show his support and solidarity during this trying period.

In order to show respect for the victims’ families, he said that the relevant authorities would provide additional information regarding the accident and urged the public to handle it with care.

This a tragedy that should not have happened. Most of the long timers know the reasons why, driver anarchy and lack of government enforcement of traffic laws.

Sr. Collado did not receive the correct information, the accident was not near the Coco Bongo, which is near Punta Cana Downtown, It was near the fuel station, Domingo Maize barrio, on the opposite side of the road, Autovia del Este, where the heavy trucks enter and depart the mines,

One of the victims, a tourist, faulted the bus driver for operating at high speed.

I have a video from surveillance cam…horrible…and of course nothing will change…!!!