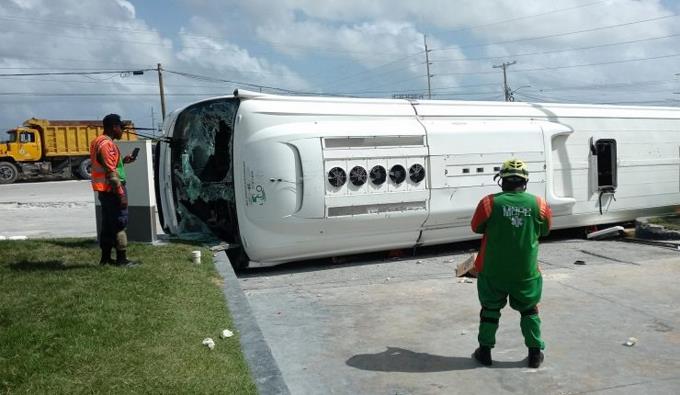 According to the Public Ministry, the driver Franklin Nin was traveling at high speed.

The prosecutor of Verón, Punta Cana, Denis Guerrero, reported that the driver who caused an accident on the Boulevard Turístico del Este highway yesterday morning, leaving three dead and dozens injured, was arrested.

Franklin Nin, who was unharmed in the accident, is detained in the Higüey Prosecutor’s Office, while the Public Ministry is in the process of compiling evidence to proceed with the request for coercive measures.

“We have interviewed the driver and some people who were there and everyone has their version of what happened,” said Guerrero, who pointed out that Nin was traveling at high speed.

The information was offered to the media by Guerrero, who went to the IMG Hospital, located in Bávaro, where 14 of the injured tourists remain hospitalized.

Third victim
The most recent victim was Argentine Valeria Paola Medina, 44, who lost one of her arms during the accident and died later. Her husband and her minor son were at the health center carrying out the procedures for the transport of the body back to their home country.

The video clearly shows this driver was yet another Dominican “risk taker” (the majority) behind the wheel. He deserves no mercy. If they provide that, then we are still the same place we were 40 years ago.

I hope this is a clear message to the hundreds of transportation drivers who drive dangerously, taking chances with other people’s lives around here. The majority should no have the job they do as they have no respect for the laws of traffic nor respect for other drivers who share the road. I drive at least 100km’s a day on the roads of Bavaro and the worst drivers are employee transfer school buses, tourist transfer vehicles and other commercial vehicles.

It is as normal as the sun rises without fail each day drivers will take risks. The government will make corrections on the autovia, ie: sealing the crossing and taking opportunity on the media to talk talk talk about what it is going to do and then does little if anything to resolve the chaos of death, injury, and destruction on the nation’s roadways.

The bus was traveling fast and the video posted on the media suggests the front tire on the operator’s side was flat in the turn, poor equipment.

There should be a law allowing tourists to refuse to get on a van or coach if they feel it is unsafe for travel, that they are entitled to a safer vehicle and receive a full refund of their payments plus 10% if vendor or vendor’s agent unable to provide.

Caribbean Corridor will be constructed by a Dominican-Panamanian consortium