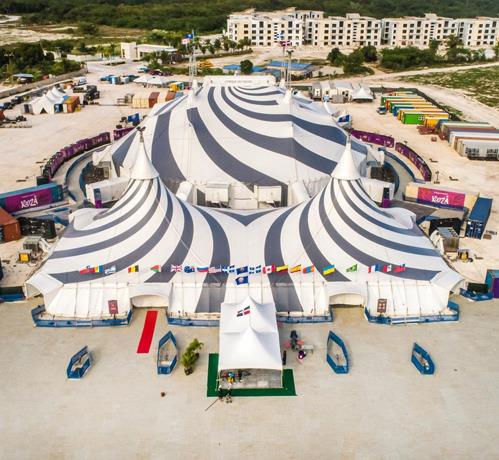 There are 70 performances until April 10 with the quality, artistic perfection and originality already known from Circo du Soleil.

“Kooza” is the show presented at Downtown Punta Cana, with 70 performances until April 10.

Santo Domingo, DR
Cirque du Soleil will cross its limit with ‘Kooza,’ the show that kicks off this Friday, January 7, under the Big Top installed in Downtown Punta Cana, with 70 performances that can be enjoyed until April 10.

It was a few weeks ago when the “Big Top,” 20 meters high and with a diameter of 51 meters, was erected on a 17,000 square meter site in the heart of the city with the help of 70 people, locals, and foreigners who raised the more than 100 poles that hold it up.

Likewise, a team of about 150 people, of 26 nationalities, including acrobats, musicians, singers, and actors of the Quebec company, have rehearsed to the max to demonstrate their prowess under the tent that impresses from the entrance of the Veron road.

“Now more than ever, we guarantee a safe show, with the proven quality and excellence of Cirque, which we know will be enjoyed by the whole family,” said Saymon Diaz, president of the organizing company, SD Concerts, adding that the tent has a seating capacity for 2,600 people.

In that sense, he gave details about the sanitary protocol that they have tried to fully comply with the new wave of covid that the Dominican Republic is experiencing and reiterated the presence of Public Health supervisors, the need to present the vaccination card, and deployment of antibacterial gel dispensers and other supplies.

“Here the only scare will be that of the public when their heart goes up in their mouths at the impression of a staff that gives everything and that is literally risking their lives,” concluded Diaz.

+ A city on wheels

On average, the Cirque crew’s space installation for about five months takes nine days to set up and three to dismantle; for this, SD Concerts brought more than a hundred cargo vans to Punta Cana.

The “city of Kooza” also has an artistic tent with a dressing area, dressing rooms, a fully equipped gymnasium, and a physiotherapy space.

At the heart of the site is the kitchen/restaurant where their own chefs cook three meals, six days a week for 300 people, and serve as a relaxation area for the entire team.

Almost as magnificent as the show is the entrance tent where the concessions area is located, where the public can purchase all kinds of food and beverages and Kooza collectibles.

During Cirque’s stay in Punta Cana, more than 120 people were hired locally to serve as ushers, cleaners, box office, administration, and logistics.

Koozå is a touring Cirque production, directed by David Shiner, which premiered on April 19, 2007, in Montreal, Canada. The show, which some 7.5 million people have enjoyed, revolves around the adventures of the Innocent One and explores themes such as loneliness and the sacred by bringing together two circus traditions: acrobatic performances and the art of clowning.

The show, which features 50-floor performers, highlights the physical demands of each number, all its splendor, and fragility through a colorful mix of the most slapstick humor.