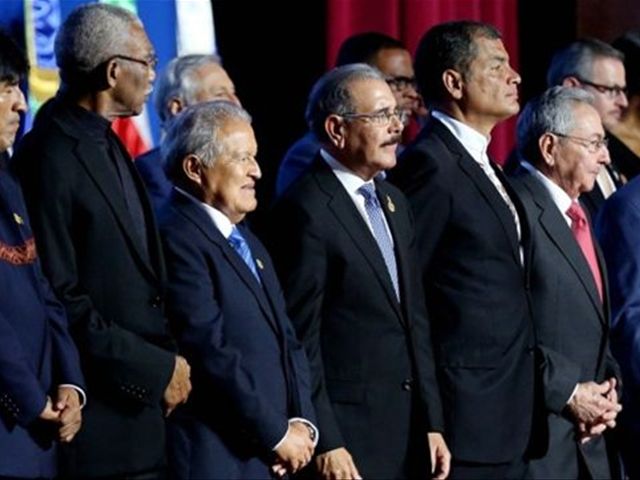 Punta Cana, Dominican Republic.- PresidentDanilo Medina on Tuesday called on the Latin American and Caribbean countries tobuild a broad regional space for trade, capital investment and financing,technology transfer, the flow of human capital and cooperation to deal with thechallenges they face with the US’ intention to abandon the policies that havehelped to raise the region’s expectations of progress.

"It does not seem reasonable to thinkthat the United States and the developed countries, after years pushingopenness and globalization, both inside and outside their borders, now abandonthese policies that have contributed to raising the hopes of progress of all ourpeoples," Medina said to open the V Summit of Heads of State andgovernments of CELAC, held in the Barceló Bávaro Convention Center at PuntaCana.

He said the most optimistic economicprojections for this year must be based on improving commodity prices,increasing tourist flow, fostering greater external demand and boostingintraregional trade.

Medina called CELAC, "a space forpolitical consultation, regional integration and collective institutionalrepresentation before the international community," which should serve asa stage to face the challenges that lie ahead.

"I will give just one data to illustratethe interconnection of our economies in the global market: the 33 nations thatmake up CELAC have signed 164 bilateral and multilateral free trade agreements inthese years," he said.

He said that while free trade agreements arenot perfect tools, the fact that their implementation has opened many doors andgenerated numerous benefits cannot be denied.

He said all of the region’s countries agreethat the whole world would lose if the US, Europe and China adopt the model oftariff reprisals that have only served to generate poverty in the past. "Itis worrisome that, in the face of announcements of unilateral impositions oftariffs to protect specific industries, the specter of protectionism and theconsequent trade wars begin to meander through all the global scenarios."

He also call of great concern that thegrowing discourse of protectionism and closing of borders isn’t limited to theeconomic sphere but could have serious consequences on the migrant population. "Giventhese challenges, we understand that CELAC has a great responsibility: toalways watch over the interests of our peoples."

He called on the governments of the region todo everything in their power to prevent the return of a past that is now tryingto sell itself as superior to the phase of development achieved.

"We must preserve the goodness of aninterconnected world, while protecting the achievements in social welfare forthe great majority of our countries," Medina said, and insisted that it’snot time to isolate and go backward, and "deepen the bonds, to move onwardwith more forward momentum" instead.