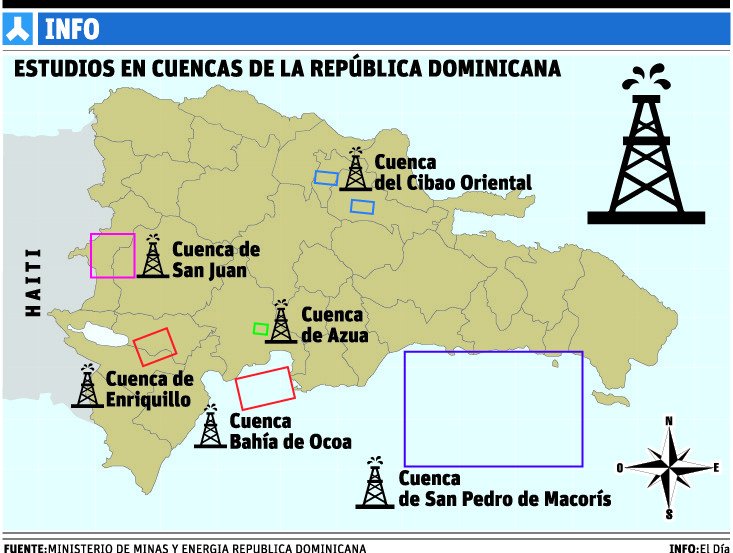 Santo Domingo.- Several areas of the Dominican Republic have rocks that are “mature enough” to produce oil or natural gas, according to the Energy and Mines Ministry’s technical analyzes which recommend further studies.

“To clear the question of whether the country has commercially exploitable oil, it’s necessary to know if there is a migration path for the hydrocarbons generated by the rocks – there are indications of this in at least three basins in which there are rocks in generation – rocks warehouse and if the system has rocks seal that trap those migrations,” the MEM said.

It said analysis by the oil technology company Schlumberger identified the six blocks that have the country’s greatest potential for oil and gas exploration.

The MEM cited reports that around 80 wells have been drilled across the country and at sea to determine the presence of oil deposits in the subsoil.

But the attempts to find exploitable oil in the past haven’t met with success, not even in the Azua basin (south), where crude burbles from wells.

Schlumberger’s analysis says the reason is that most of the wells drilled weren’t deep enough to reach the rocks, as today’s advanced software indicates that they are generating hydrocarbons. “This means that even with generative rocks and synchrony in the oil system, no attempt could give positive results if the perforations were superficial with respect to the depth of the rock.”

The basins with the most potential

“There are definite traps that coincide with the generating foci in the Enriquillo basin, where the Sombrerito and Plaisance rocks are found in the oil generation window,” the MEM said.

“In the Azua and Ocoa basins, it was determined that there are “structural risers that function as hydrocarbon storage traps and coincide with the areas where the Ocoa and Jura generating rocks are in the generation window.”

In the San Juan-Ocoa-Neiba basin rocks are within the oil generation window and there could be potential deep-sea deposits,” the agency said.

“In Enriquillo, Azua and San Juan – the most attractive areas – there are also possible migration routes and accumulations of hydrocarbons, which indicates that the oil system works in those areas.:

Meanwhile the interpretation of the San Pedro de Macorís platform suggests a “potential and considerable interest,” it said, adding that the acquisition of 2D lines perpendicular to the existing ones would allow a better definition of the deep part of the basin.