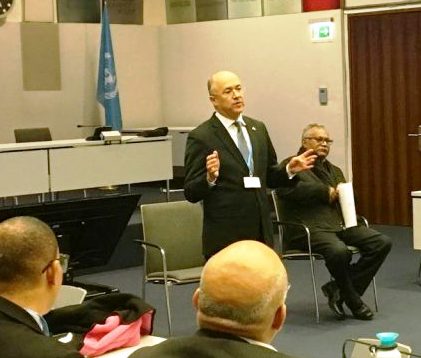 Bonn.- The Dominican delegation headed by Environment minister, Francisco Dominguez was praised on Tues. for stressing the need for the international community to support cross-border environmental initiatives, which can mitigate a water crisis catastrophe especially in Haiti.

Costa Rica Environment minister, Edgar Gutiérrez praised Dominguez’s statement that “our nation had to work twice as much, in the case of Haiti, because some of the rivers that supply drinking water to the sister country are born in Dominican territory.”

“This is a valuable example of brotherhood and solidarity,” Gutiérrez said at a multilateral meeting of delegates from Central America and the Caribbean, with Germany Federal Environment Ministry secretary, Johen Flasbarth.

The Costa Rican official  called on the international community to pay special attention to the Haitian people, as stated by the Dominican position urging to adopt mechanisms to improve and secure sources of drinking water for cities such as Port-au-Prince.