Pedernales – a border town in crisis 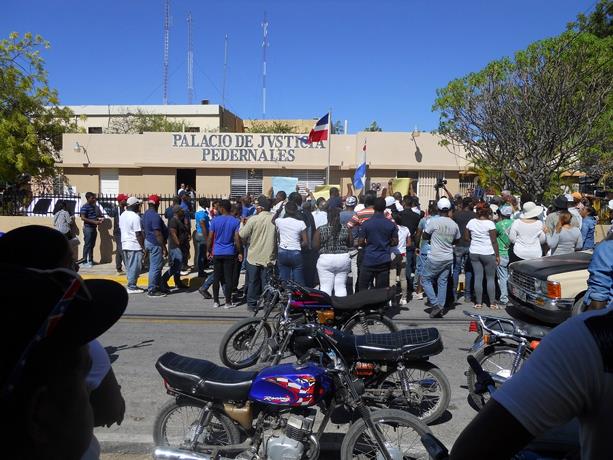 Pedernales.- This municipality on the southwestern border is experiencing a serious economic crisis since the free zone recently laid off 607 people, which followed the closure of the Bi-national Market and the Ideal Dominicana, Cementos Andino, and Dovemco, a bauxite exporter, two years ago. These three companies used to employ 3,500 workers.

The dismissal of free zone workers has led to a range of reactions, including tire burning street protests and demonstrations outside the homes of Mayor Luis Manuel Matos Féliz, (Minguito) and free zone manager Oddy García.

The clothing company announced last week it was closing operations because there was no market for its products because its main trading partner was Haiti, but all commercial activitie ceased in the wake of the murder of farmer Julio Reyes Pérez and his wife Neida Urbáez, allegedly by three Haitians who fled the country. The Haitian police has detained one of the suspects.

The Bi-national Market was closed on March 12th, when local residents gave Haitians 24 hours to leave the province.

According to statistics, the market generated about three million pesos a day for traders and hawkers, while the sale of used clothing to the Haitian market turned over more than ten million pesos per day.

When the bauxite export company was open it indirectly provided work for 200 truckers who transported the mineral and earned up to sixty thousand pesos a day.

The only employer in Pedernales since the closure of the Free Zone is the town hall. “We are the presidential palace, we are the government now, and we can’t take any more, although we want to help everyone the council can’t,” said mayor Matos Féliz.

The mayor says that he is on the receiving end of a lot of pressure both from former free zone workers as well as the traders and other sectors in Pedernales.

This, concludes Matos Féliz, has put Pedernales in a very difficult situation.