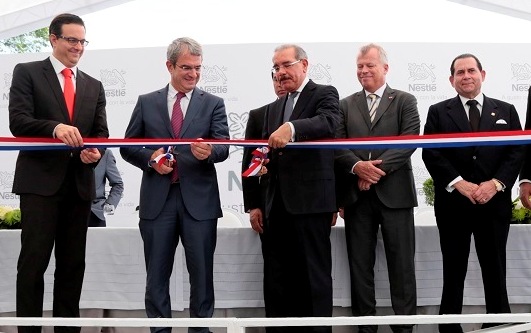 San Francisco DM, Dominican Republic.- President Danilo Medina, on Wed. attended the inaugural of a modern flexible packaging production plant for the Carnation, Nesquik and Impulso brands, among others, built by the Swiss-based company Nestlé Dominicana at a cost of US$10.0 million.

Speaking at the opening ceremony, Nestlé Dominicana CEO, Alexandre Carreteiro, said his company will have invested US$130.0 million in works for the country from 2016 to 2021.

He said the company annually purchases over 40 million liters of fresh milk from dairies of the various regions of the Dominican Republic, at a cost of over RD$1.0.0 billion.