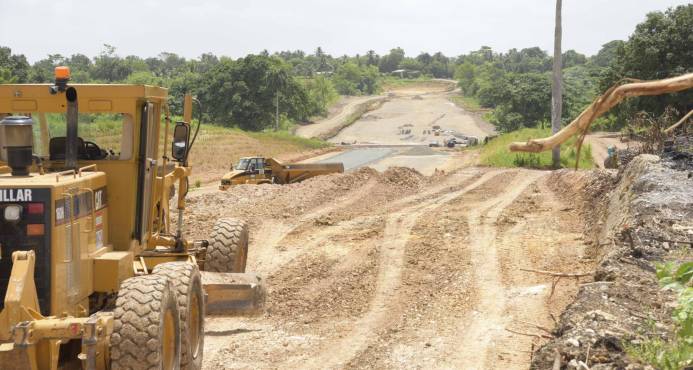 Santo Domingo.- Although prolonged and heavy rainfall slowed down the pace of work on the second phase of the Circunvalación Juan Bosch bypass, construction of the road is underway and the three stretches will soon connect.

According to engineer Juan Villaverde, representative of the Rizek consortium building the stretch of the road that links with Yamasá, there had been some problems with the progress mainly caused by heavy rainfall earlier in the year. He said that the company had moved some 5000 cubic meters of filler per day in two areas, as well as two cuts.

The bypass will have six bridges, three underpasses, two returns and one traffic interchange.

Villaverde said that the original design for the road has been modified to reduce costs and improve landscaping. The road no longer follows the straight line leading to Km 16 of the Yamasá road or the area known as Los Bambús. This stretch turns to the north, crosses to the east and comes out in the community of Mal Nombre to intersect with the next stretch in 10 kilometers.

He said that most landowners on the route had agreed to sell their properties. The bypass is scheduled for completion in late 2019.

Phase A of the second stretch of the bypass which starts at Km 23 of the Duarte Highway to the Yamasá road is 16.5 km in length and phase B, which links the Yamasá road to the Samana Highway is 20.2 km long. According to Ramón Pepín, vice minister at the Ministry of Public Works, the project is 15% complete.