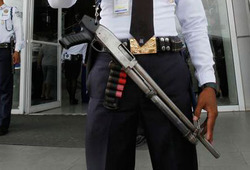 Santo Domingo.- The Private Security Superintendence on Fri. said it couldn’t disclose information into the complaint that 400 private security companies are not regulated, because its norms prohibit giving information by phone.

It said anyone or entity that needs an information should visit that unit in their premises on José Contreras Av. In the National District and immediately they are received by an official who “will immediately processes the request to the correspondent agency.”

Chamber of Deputies Defense and Security Commission chairman Elías Serulle made the denunciation in a Thursday interview with newspaper Hoy.

He said that private security companies that are being affected by the Social Security Law, which added 21% of the cost of personnel and the TBIS tax, in his opinion, takes away a margin of growth. “That is why hundreds are operating irregularly.”

He said they aim to find a solution to the deadlock on taxes for the hiring of security workers and argued that those companies were affected because of the ban levied on weapons, which are the main tool of the rent-a-cops.