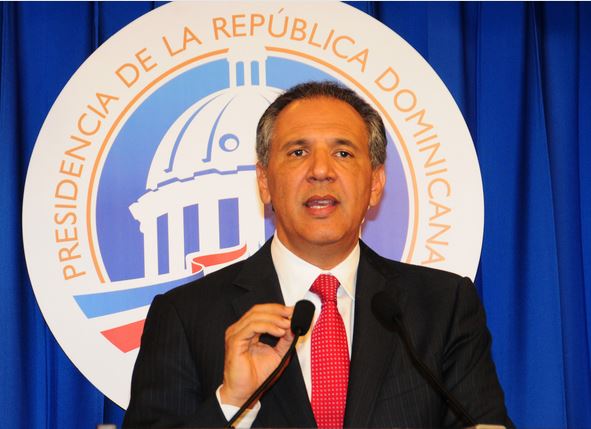 José Ramón Peralta, administrative minister of the Presidency, highlighted the achievements made by the country since 2012 and the main purposes of the government for next year.

The administrative minister of the Presidency, José Ramón Peralta, affirmed that the primary purpose of the Government throughout 2019 will be to maintain the intensity of work to continue offering welfare to the population.

He said that the most vulnerable sectors of Dominican society remain the center of attention of President Danilo Medina’s administration. “And will be so through the next year and on for the duration of the administration.”

He highlighted the fact that hundreds of thousands have been removed from poverty under public policies of social inclusion.

“In the Government, we are focused on working to continue improving the living conditions of the population, in an ongoing active effort to reduce poverty and social inequality, issues in which we have made significant progress,” he said.

He maintained that this dedication to work since August 16, 2012, is what has turned the Dominican Republic into the country with the highest economic growth in Latin America and the most attractive for foreign investments, to the point that this year they surpassed US $3.5 billion.

Regarding the diplomatic and trade relations with the People’s Republic of China and the United States, Peralta assured that they proceed correctly and respectfully. He pointed out that in the case of the Chinese, much progress has been made since they formalized the first of May of this year and that with the Americans, they are at their best in history.

Indications from China suggest that there will be essential demands of Dominican products such as mangoes, avocados, rums, and coffee, among others, “opening a potential market of about 1.3 billion consumers.”

Another important aspect of relations with the People’s Republic of China, he added, is that investments from that country are soon to be finalized and will soon be announced. He informed that before the establishment of relations with that nation, the Government sought and obtained the consensus of the main political leaders and the Dominican business community.

The Administrative Minister of the Presidency also highlighted the creation of an export culture as one of the great achievements this year in the Dominican Republic, after highlighting the increase of that line by more than 9%.

He said that undoubtedly it was a transcendent step that the Dominican exports exceeded US $ 11 billion, about US $ 1 billion and almost 9% over those registered in 2017.

THE EXTENSION OF PUERTO MANZANILLO

Peralta revealed that the government has just received a study commissioned to carry out the expansion of the port of Manzanillo, in the province of Monte Cristy. He said that there is interest in developing this project given the strategic importance for the perspective of economic development of the country.

He noted that in fact, investments from several countries have shown willingness to invest in the expansion and modernization of the Manzanillo port.