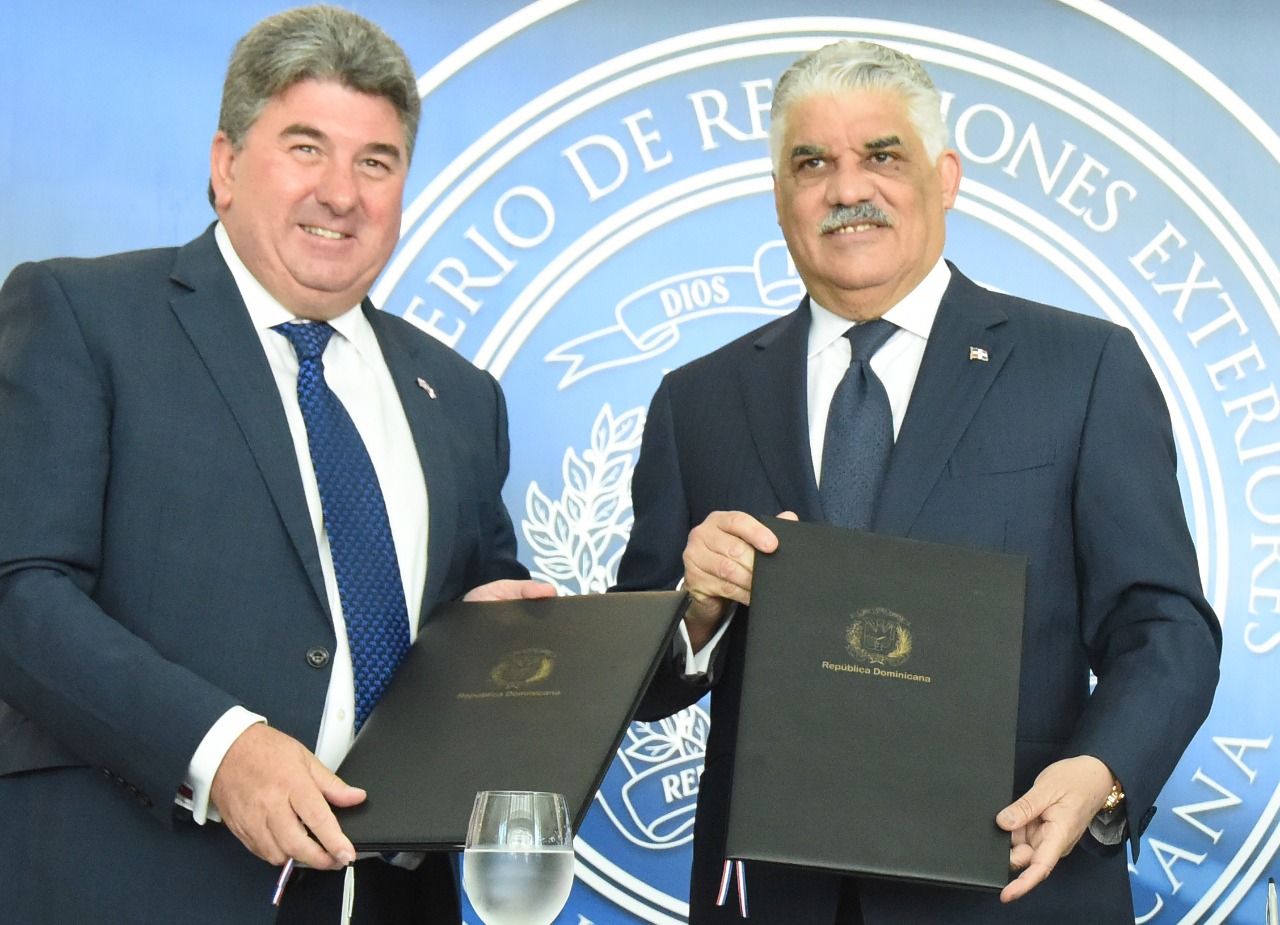 Santo Domingo, April 8, 2019.- The Governments of the Dominican Republic and of the United Kingdom of Great Britain announce with this joint statement, issued by the Minister of Foreign Affairs Miguel Vargas and the Ambassador of the United Kingdom accredited in the country, Chris Campbell, the signing of the Agreement of Economic Association between the United Kingdom of Great Britain and Northern Ireland and the Dominican Republic jointly with the member countries of the Caribbean Forum of African, Caribbean and Pacific States (CARIFORO).

The signing of this Agreement is of great importance, since with it, both countries guarantee the continuity of all the commercial rights and commitments established in the Economic Association Agreement (EPA) between the European Union (EU) and the CARIFORUM States, once the United Kingdom (UK) materializes its exit from the European bloc.

Both countries accelerated the signing of this agreement due to the political situation that is happening in the United Kingdom of Great Britain and Northern Ireland in relation to the European Union.

Since March 2017, the Dominican Republic team and the other CARIFORO Ministers agreed to initiate joint talks with representatives of the British Government, in order to finalize a transitional trade agreement with that country that would give continuity to the preferences agreed upon in the Economic Association Agreement (EPA) with the European Union.

As of January 2018, an intense technical discussion process began among senior officials of the Dominican Republic, the CARIFORO Member States and the British Government with the aim of concluding a new transitional trade agreement that incorporated all trade rights and commitments already established in the CARIFORO-EU EPA and that could enter into force once the United Kingdom formally left the European Union.

This process gave rise to several technical meetings held by the CARIFORO Senior Officials Group, in which the Dominican Republic and its team participated actively and collaboratively. At the meeting of said group held in Saint Lucia, on March 22, 2019, the text of the new EPA-United Kingdom-CARIFORO agreement was concluded and agreed upon for signature by the respective Ministers. The signing of a Memorandum of Understanding with the United Kingdom of which the Dominican Republic forms part is also approved, with the purpose of guaranteeing the application of the tariff preferences that exist in the EPA-European Union-CARIFORO during the time necessary for the ratification of the agreement.

The new agreement and memorandum were initially signed by nine members of CARIFORO, on March 22 of this year. Subsequently, on April 1, the Republic of Trinidad and Tobago did so.

On April 4 of this year, after the Ministry of Foreign Affairs complied with the procedures stipulated in our internal legislation, President Danilo Medina, under his constitutional powers, issued the power of attorney for the Dominican Republic as State sovereign, sign through its Embassy in London the new agreement and the aforementioned Memorandum of Understanding with the United Kingdom.

With the conclusion of this process, the Dominican Republic reaffirms its commercial policy of participation in trade agreements that guarantee preferential access of national goods and services to international markets and contribute to strengthening trade, cooperation and regional integration ties. With this agreement, both governments ratify their intention that, independently of the circumstances of the departure of the United Kingdom from the European Union, they do not generate any alteration of the commercial relations with the CARIFORO countries.

It has been the intention of the Dominican Republic, of President Danilo Medina and his Foreign Minister Miguel Vargas, shared with the authorities of the British government to guarantee preferential access to the respective markets, in the Dominican case, the agricultural products that are transcendental for many of the provincial communities whose economies are based on exports to the English market, and in the case of England, guarantee the Dominican market presence through preferential access to British products.

In addition, the government of the Dominican Republic and of the United Kingdom, in concluding this agreement, share the common goal of maintaining a close political and commercial relationship, which has existed since 1850, when the Dominican Republic signed its first trade agreement, coincidentally with the United Kingdom, and that allows to take advantage of to the maximum the multiple opportunities of commerce, investment and cooperation, that would have advantageous repercussion in their respective nations, and the bonds of friendship that characterize their traditional relations.