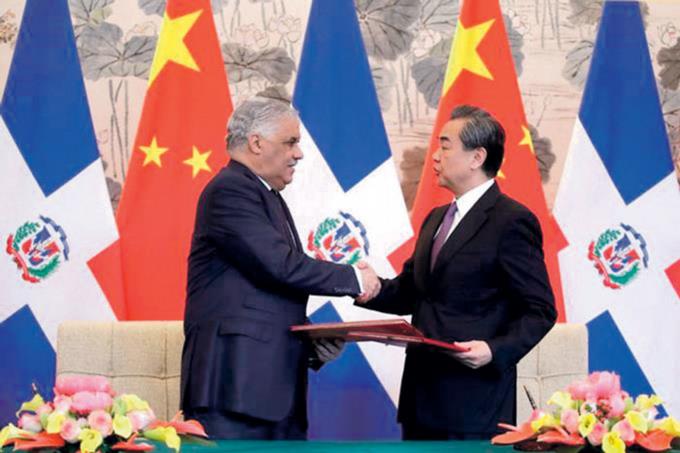 This Wednesday, May 1, the People’s Republic of China and the Dominican Republic celebrate a year of formalizing their diplomatic relationship, at a time when there are strong shadows on global trade, fundamentally between the Asian nation, the United States, and the world. However, on this date, concrete actions are already observed: a greater commercial activity, of educational cooperation and even of the flow of visitors with the liberation of the Chinese visa.

The central theme of the diplomatic and political actions that moved the United States to visit the Dominican Republic before this approach remains to be seen, including the promises of soft financing for the solution of the rehabilitation of networks in the electricity sector. There was talk of a loan of US $ 600 million at a preferential rate that would be operated by the Dominican Corporation of State Electricity Companies (CDEEE), but this draft has not yet been prepared in the local government headquarters.

At least 20 agreements have been signed to consolidate the relations formalized on May 1, 2018, “on the basis of the one-China principle”.

For Xu Tiefei, press attaché of the Chinese embassy in the country, bilateral relations have passed from the start-up phase to the acceleration phase. Several visits have been made to China, including President Danilo Medina and congressional delegations and government ministers.

In only half a year, according to Xu, the phases of the programs of commercial promotion, phytosanitary, tourism, education, sports, human resources, tobacco, emergency management, advance.

Last week, the administrative minister of the Presidency, José Ramón Peralta, participated on behalf of the Government in the Second Forum of the Strip and the Road, promoted by President Xi Jinping and the government of China, as a show of approach.

The volume of trade between China and the Dominican Republic in 2018 was US $ 2,289 million, with a year-on-year increase of 22%, Xu assures, while in the first two months of this year, the Dominican export to China rose by 411%, for a total of US $ 110 million, equivalent to 61% of exports to China in 2018. “Typical products such as rum, tobacco, coconut milk, and cocoa powder have been exported to China.” In addition to the number of Chinese companies that have come to the Dominican Republic to establish branches, factories or representative offices, has quadrupled. China is considered an emerging superpower with 1,395 million inhabitants in 22 provinces that register high purchasing power per GDP, the first industrial power and the largest exporter and importer in the world.

In 2012 alone, 740 million Chinese people traveled within its borders, according to its Wikipedia data, which shows another opportunity for the Latin American region that seeks to capture a piece of the cake and especially for the Dominican Republic that aims to attract 10 million tourists.

China, according to data from the General Directorate of Customs (DGA), has increased its trade. Buy bronze, tobacco, cigars among other products.