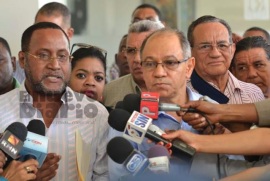 Santo Domingo.- Union leaders on Tuesday walked out of the talks between labor and management leading to a salary increase, over a dispute on the reclassification of companies, and announced protests to voice their demands.

Employers insist on reclassifying the companies before agreeing to a wage increase, but which the unions oppose.

At the end of the meeting Dominican Workers Union (CNTD) president, Jacobo Ramos, told the press that the employers’ proposal regarding the classification of companies “lowers wages.”

He said that while the issue is on the table, the unions will not participate in the meetings, and warned they’ll call for mobilizations. “If that’s what they want, then in that arena we will fight.”