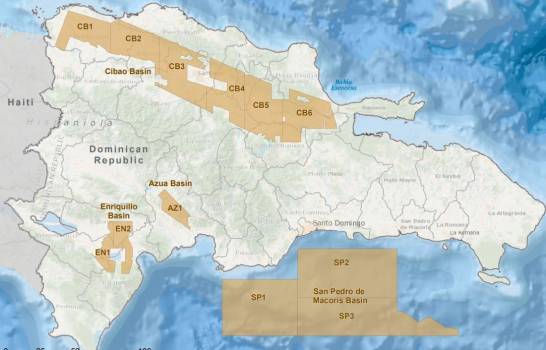 The Ministry of Energy and Mines will make new gas and oil rounds in the coming months in which it will include blocks for exploration and exploitation of hydrocarbons in areas that were not part of the first round.

This Wednesday, the government closed the first oil auction in which only one company – Apache Dominican Republic Corporation – reached the bid submission phase. The US company received the concession of block 2 of the offshore basin of San Pedro de Macorís. Apache Dominican Republic Corporation, which will have a four-year contract renewable for ten years, made an investment offer of $ 5 million that was accepted by the Executive. Now the contract will have to be approved by Congress for its entry into force.

From the first bidding round, there were 11 blocks left for which no offers were received, in addition to the proposal of a company (name not disclosed) to define another block in which it would be interested in submitting offers to explore hydrocarbons.

When the beginning of the oil round was announced, in an act held last July in Texas, United States, the Dominican government presented 14 blocks in four basins on offer: six in Cibao, four in San Pedro de Macorís, three in Enriquillo and One in Azua. But almost two months later, the Ministry of Energy and Mines acknowledged that several of the areas of those blocks were within protected areas and clarified that those were not the final blocks. The final blocks would be presented in October. Any area that adjoined a protected area would be eliminated from the oil round.

When the authorities showed the definitive blocks for hydrocarbon exploration, the map on offer for investors left Enriquillo with only two blocks, San Pedro de Macorís with three instead of four, and Cibao and Azua with six and one, respectively, but with a reduction in some areas because they also overlapped with protected areas.

In the end, according to government sources, there was not enough interest in the land blocks offered for hydrocarbon exploration. Additionally, the companies that did show up did not prequalify, while for the San Pedro maritime platform, there was another company interested, but not in The defined blocks.

The Caribbean in exploration

Since the late 1990s, several nations in Central America and the Caribbean have tried to develop the oil and gas industry, but without success. Nicaragua, Belize, and Cuba have granted licenses to foreign oil companies to explore hydrocarbons in their Caribbean basins but, although they have found a presence of oil or gas, they are not available in quantities that make commercialization profitable. The exceptions are Trinidad, with historic gas exploitation, and Colombia, and Venezuela, which have oil exploitation projects in Caribbean areas. More recently, in Guyana, the US oil company Exxon discovered a vast reserve of 5.5 billion barrels in the country’s waters, whose exploitation is imminent.