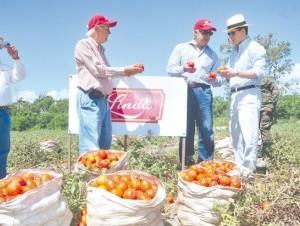 Santo Domingo.- Vegetable producers in Ocoa (south) don’t know what to do with their crops and in frank desperation they have started giving it away and using it to feed the animals so that they don’t rot in the crates.

They assure that they have lost more than three million pounds of tomatoes, an estimated RD$30 million, only in El Pinar, one of the areas with the highest production of vegetables in greenhouses. They also reported losses in peppers, cucumbers and other vegetables.

The grower Manuel Pujols stated that despite the fact that the Government, through the Ministry of Agriculture, assured that it would support them by buying their crops, the purchase price they offer is almost a mockery compared to the resources they have invested to manage the harvest.

“The Government through the Minister of Agriculture Osmar Benítez is offering to pay the tomato at RD$6.00 a pound and for us it costs RD$8 to produce 1 pound of tomato, they also ask us to pack them in 5-pound bags, take them in cardboard boxes and transport them, which seems to us a laughable offer. In the end, it comes out at RD$2 a pound and it costs RD$8 pesos to produce a pound of tomato in greenhouses,” Pujols told Listin.