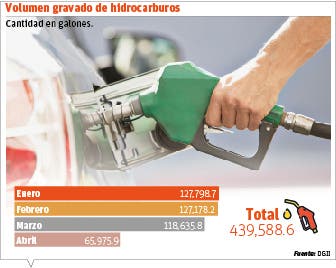 Taxes. Between January-April, the State received RD $ 6 billion less for this concept. Cause. Sales fell by up to 30%.

SANTO DOMINGO. -The restrictions on mobility and closure of the population due to the Covid-19 pandemic have been particularly hard for fuel sellers, also for the State, which had a drop of -16% -19% fuel tax collections.

The loss was almost RD $ 6 billion if you compare what the State had planned to enter between January and April 2020, with what it received for Ad Valoren and Specific taxes, according to statistics from the General Directorate of Internal Taxes (DGII).

From the Specific tax, the entity had projected to obtain RD $ 14.8 billion in the four months, but only saw RD $ 10.7 billion; meanwhile, from Ad value, they expected RD $ 7.4 billion, and just RD $ 5.2 billion arrived.

These collections are also below the amounts of 2019. Their fall is due to a reduction in economic activities and a drop in the price of oil by 71.6% in April (compared to April 2019).

The most significant decrease occurred in April when the majority of the population was confined to their homes, and the fuel dispensing stations barely sold 70 or 75% of the usual. For this reason, the DGII registered 65,975 gallons of taxed hydrocarbons, 44% less than in April 2019.

“Retailers’ sales fell flat. They fell between 25% and 30%,” said Anulfo Rivas, former president of the National Association of Gasoline Retailers (Anadegas), interviewed by EL DÍA. For this reason, it considered that the Government should increase the profit margins of that sector.