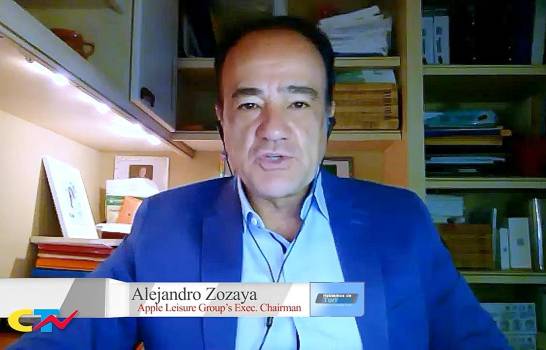 Tourism expert and CEO of the company Apple Leisure, Alex Zozaya, highlighted the solid position that the Dominican Republic has in tourism worldwide and recommended that those elected in the next presidential elections continue the work that has been done in the sector.

He understands that continuity is essential to continue the development of tourism in the country, which last year received more than 7.5 million visitors by air and sea.

“It is undeniable how well things have been done in terms of tourism in the Dominican Republic in recent years,” said the Mexican businessman in the Hablemos de Turismo space, produced and directed by Miguel Calzada on CTN.

Zozaya considered that it would be a shame if the political environment, which currently reigns in the country, affects or distracts the resources that will have to be super strategically and very effectively focused on the recovery of the sector as a result of the effects of the coronavirus pandemic.

He said that thanks to the success that Dominican tourism has had in recent years, it is possible to observe “a growth that is there in all aspects, in the number of jobs and direct investment.”

The CEO of Apple Leisure affirmed that thanks to this success, Dominican tourism has a solid base and enjoys international recognition, so this scheme should continue.

Zozaya, who was declared a champion of tourism by the Association of Hotels and Tourism of the Dominican Republic (Asonahores), understands that the “bases the country has today are strong enough, good enough to build on top of that.”

He hopes, he says, that the political issue does not affect a strategy, at a time when it is necessary to be more united than ever: “Society, private sector and government.”

“I hope there is continuity and we do not divide, but we really unite, that we build on what has been done, which has been done very well,” said the businessman and tourism expert in his interview on CTN, with Miguel Calzada.