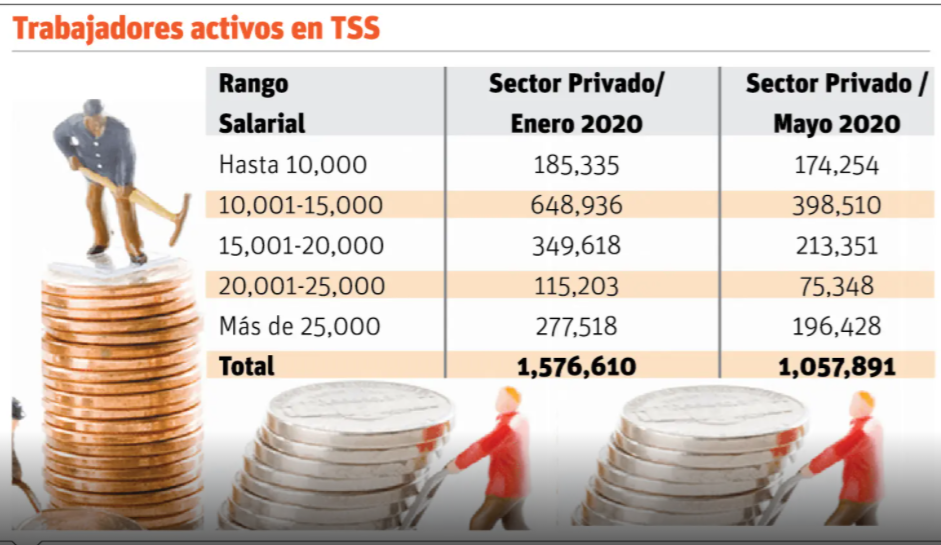 Abreu warns with suspension extension layoffs will increase. The most affected employees are young people between the ages of 20 and 39 from different sectors.

SANTO DOMINGO. -In the last three months, an estimated 150,000 workers have been laid off in the private sector as a result of the economic stoppage, for more than two months to contain the contagion from Covid -19.

According to Rafael (Pepe) Abreu, president of the National Confederation of Trade Union Unity (CNUS), the sectors that registered these cancellations are tourism, construction, commerce, hardware stores, health in private clinics and free zones.

In fact, the Minister of Labor, Winston Santos, weeks ago expressed concern about this situation, since he estimates that many of the suspensions will end as terminations, which could raise unemployment from 5.6% to 9% at the end of the year.

Suspension of work
Abreu explained that he makes these estimates based on the data he has collected in the different sectors in which they have members.

However, he warns that this number could increase in the last days after the conclusion of the program of economic assistance to suspended employees, which grants between 5,000 and 8,500 to suspended workers and those who continue working, respectively.

He also indicated that with the extension of the term to suspend employees issued by the Ministry of Labor, thousands of employees will opt for a termination.

“That would make more than 400,000 workers in the private sector,” Abreu explained.
He maintained that the style in which companies apply the help offered by the Government, through the Solidarity Assistance Fund for Employees (FASE) and the work suspensions registered in this health crisis, will affect benefits such as the calculation of the Easter royalty or double salary and labor benefits.

The most affected
Until May of this year, in the middle of the community contagion phase, some 28,718 private-sector employees with two or more jobs lost one of them.

It is the young population, aged between 20 and 39, the most affected, representing 39% of the jobs that stopped contributing to the social security system, in April, said Dr. Yesenia Díaz, director of Insurance in Health for the Contributory Regime, during a webinar entitled Contribution of the “Social Security System Before the Covid Pandemic -19.”

On the other hand, he pointed out that the pandemic caused that some 497,698 affiliates did not have coverage until the month of May, affecting more than nine hundred thousand family nuclei that had health coverage, but that did maintain it due to government assistance.

He revealed that this Thursday they will sit down with the employers and the Government to discuss the extension of the suspension in which they will propose extending the term of government assistance, which ensures the full salary of workers so that don’t lose benefits.