How big is the Dominican State? 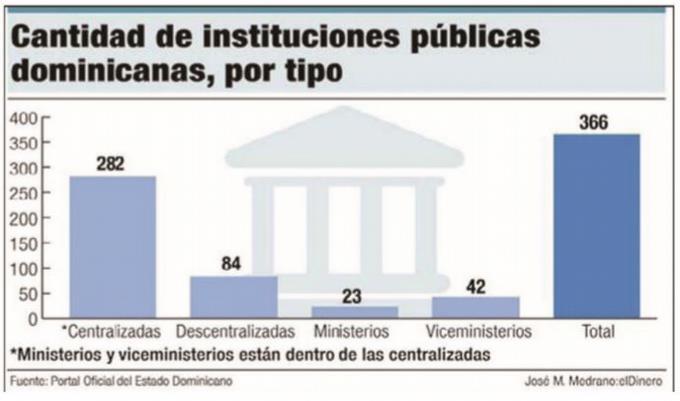 First, it is larger than Costa Rica, El Salvador, Cuba, Panama, Puerto Rico, Nicaragua, Honduras, and Guatemala. It is also more extensive than the one in Chile.

We have 366 centralized and decentralized state institutions, many duplicated, others up to five times, and dozens inactive. These institutions have more than 550,000 employees (without pensioners or municipal employees). We are the third country in all of Latin America, with more employees per 100,000 inhabitants. For example, there are five institutions in childcare, 11 in agriculture, three in aeronautics, 13 in social areas, and two in infrastructure.

There are also seven in the electricity sector with three distribution companies (EDES), two in housing, and several public projects that are managed independently, such as La Barquita and the city of Juan Bosch. In water, there are seven institutions, in health six and education another five. It is a web of state institutions that no one can decipher, and perhaps no one knows the exact number. Besides, there are 250 secretaries without a portfolio, undersecretaries and presidential advisers, and dozens of Councils. Their members can earn more than RD $ 250,000 per month for attending one or two meetings a month.

Reforming the State size as God intended would mean cutting the number of employees in half. But that is impossible, and for many years we will live with this heavy budget burden. I remember that being Secretary of Finance in 2002, and with 230,000

employees on the payroll, I said that with half of them, the Government would function correctly, which made me the most wanted criminal in the country.

The cost of the Dominican State is unsustainable. Therefore, initiating a reform, even a modest one, eliminating several institutions and merging others, is much more important than forcing us to enter a macroeconomic adjustment program. That would strip 150,000 people of their jobs to improve fiscal accounts and avoid suspension in paying the debt. It would be catastrophic. And in that the president-elect has been extremely careful, focusing his reforming attention on those institutions that are the most corrupt on the government train and that most people want to see eliminated: a small step, but a big leap.