Profile of Dominican officials is endorsed by extensive academic training 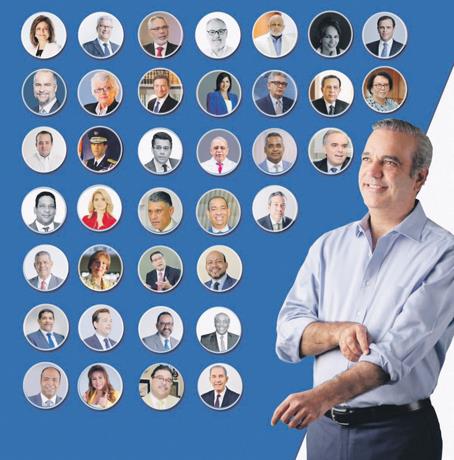 The Engage firm conducted a study on the first 37 employees. EXTERNAL

According to a firm Engage survey, the average age of government officials is 58 years old, they have extensive academic training, and the majority have held positions in the public administration.

So far, only two repeat assignments were confirmed in their positions for the work performed. Héctor Valdez Albizu in the Central Bank and Vice Minister Hugo Rivera Fernández, now with the ambassador’s rank, employs a decree published this Tuesday night. Before being sworn in as president of the Dominican Republic, Luis Abinader Corona had practically announced the new cabinet with him to make up your Government.

According to the strategic communication firm chaired by Stella León, of the 37 profiles analyzed, 23 of the new appointments correspond to people who had worked in the public administration, and 14 come from the private sector or have worked in NGOs (Non-Governmental Organizations).

The Engage firm presented the report called Abinader Squad through the Com.pol platform.

This Tuesday, President Abinader Corona appointed 27 provincial governors. Other appointments included entities such as the Insurance Superintendency and the Attorney General’s Office, various vice ministries of Tourism, the Ministry of Public Administration, Industry and Commerce, Education, and the Administrative Ministry of the Presidency.

Through Decree 354-20, President Abinader Corona reconfirmed Hugo Rivera Fernández, from the San Juan Bautista de la Salle Institute and a graduate of the Santísima Trinidad College, in his position as Vice-Minister for Economic Affairs and International Cooperation, with extensive experience in international trade. Rivera Fernández served as the State of Industry and Commerce and in Charge of Foreign Trade (2000–2004). He was together with Sonia Guzmán. Today he is designated ambassador in Washington, one of the principal negotiators of DR-Cafta and a great connoisseur of the EPA, cooperation and development agreement signed with Europe and the ACP countries (Africa, Caribbean, and Pacific).

It is the Vice-Minister’s function for Economic Affairs and International Cooperation of the Ministry to execute the guidelines of foreign policy in matters of economic relations.

Likewise, “coordinate and direct the strategy of international trade negotiations and establish actions that allow the country to be linked efficiently in the global economy, through monetary and economic integration and international cooperation, coordinating actions with the Ministry of Economy. Planning and Development (MEPyD) and the other economic entities of the State, private sector, and academia contribute to sustainable development.”

In article 22 of presidential decree 354-20, the Government granted the rank of ambassador to Rivera Fernández, while he remains in office.

In the Central Bank case, the reconfirmation of Valdez Albizu as head of the monetary institution was one of the first announcements of the new Government of the Modern Revolutionary Party (PRM).

Stella León, partner-president of Engage, indicated that “it is important to know the cabinet members, not only individually but collectively. The value of this report is precisely knowing the team as a whole.”

Faced with the “new normal,” governments, officials and leaders have had to modify their communication strategies, leading them to use digital platforms and social networks in a strategic way to communicate and interact with their audiences. “The current times demand a closer, transparent and timely communication,” said Stella León.

The communication firm -permanently- measures the accounts’ performance in the social networks of the main political actors, in its effort to create and maintain conversations with citizens. Raul Baz, partner-executive vice president of the firm, added that “Engage offers this report to the public to highlight the men and women who will lead the Dominican Republic’s helm.

62% (23 members) of Luis Abinader’s team have worked in the State, and 14 officials come from the private sector and NGOs.

62% of the civil servants have reached the Master’s degree, of which 61% obtained their degree from universities abroad.

54% of officials have active and public accounts on Instagram.