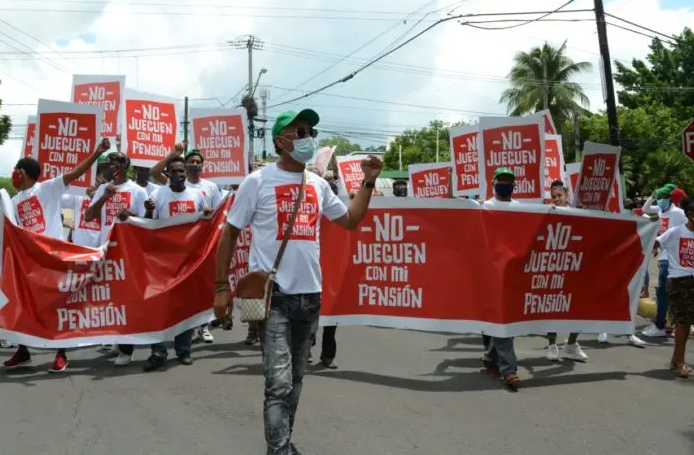 SAN FRANCISCO DE MACORIS.- The Association of Industrial Workers of the Duarte province raised yesterday the unification of all the Social Security System actors to modify the law that creates the pension system so that workers obtain greater benefits without the need to extract 30% of the savings as suggested by some legislators.

The president of the association, José Miguel Balbuena, and the general secretary, Alfredo Gabín, referred to what they described as “clearly crazy maneuvers promoted by reformist leaders Pedro Botello and Ramón Rogelio Genao against pension funds, supposedly to assist suspended workers amid the coronavirus pandemic.”

“Although it has been more than proven that it is nothing more than a hoax, the sale of a nightmare as if it were a stimulating dream, the debauchery, and ambition with which these two unscrupulous representatives move has led them to ignore the calls to reflection and good sense,” said Balbuena in a meeting-discussion in which he cited the voices that have warned about the danger of touching the funds of the AFPs.

He affirmed that Botello and Genao “continue to bet on a disaster, which would inevitably come if, as is feared, when pensions are touched, the value of the peso would plummet, giving rise to rampant inflation of generalized rise in prices, mainly in consumer food products. Massive,” without taking into account that all social classes would suffer its effects, mainly workers.

When exposing the reasons why the Association of Industrial Workers of the Duarte province has spoken out on this issue, Balbuena indicated that the sense of social and human solidarity is one of the most distinctive features of a community and of a nation where there is sensitivity so as not to live with our backs to the fate of others, only looking for particular advantages and benefits.

He then added that “this authentic solidarity that allows us to share hardships and promote efforts to overcome them, especially in difficult times, becomes evident when danger threatens us and what is imposed, therefore, is to give the voice of alert, as we are doing at this time to avoid a national disaster.“

“The board of directors and the members of the association cannot remain indifferent, so we have considered it a civic and patriotic duty to call the attention of all of you so that we avoid this serious disorder,” he said, addressing those attending the meeting.

“At this juncture in which thousands of jobs have been lost as a result of the pandemic and affected many productive activities and the smooth running of many others, we cannot allow the frantic personal ambition of 2 out of control men to cause further job losses to work and unleash more inflation,” said Balbuena.

In the same sense, Gabín spoke when he asked the new legislators elected in the last elections to meditate on these risks calmly and that in defense of the general interest, not give their approval to a negative project, at a time when the homeland demands the goodwill of his best men.

“If we want to promote a real and effective initiative in favor of the working class, what is appropriate is to promote a consensus to reform the Social Security Law, to achieve better pensions for employees at the time of a dignified retirement and guaranteed,” stated Gabín.

He said that we must discard what he called the “monstrosity of Pedro Botello and Ramón Rogelio Genao and trust that the new congressmen will reject the maneuvers of these two individuals and thinking about what is best for the country and its people, they will say a resounding no to these claims, ridding the country of greater evils in times of this deadly pandemic.”