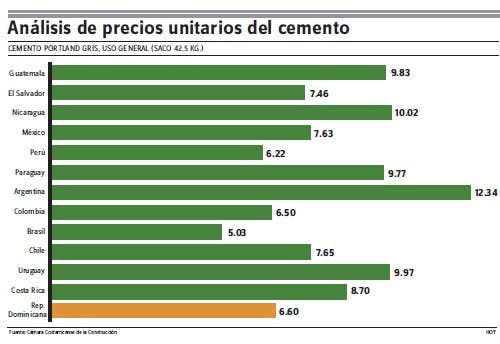 Cement is one of the products that has varied the least despite international market increases.

The retail price of cement in the country’s hardware stores remains 18% lower than the average of other countries, which means that the cement industry in the Dominican Republic is one of the most competitive in the region in the last eight years, according to a report on the sector to which this newspaper has had access.

According to a comparative study by the Costa Rican Chamber of Construction, the lowest average price in all of Central America and the Caribbean for a bag of portland cement is US$7.46 in El Salvador, while in the Dominican Republic, the average price in hardware stores is US$6.5.

This highlights the competitiveness of the Dominican Republic’s industry, which maintains lower price levels than the entire region, since Mexico has an average price of US$7.63, Costa Rica US$8.70, Guatemala US$9.83, and Nicaragua exceeds the US$10 barrier for each bag of cement.

This situation could be explained by the fact that, according to official data, the Dominican Republic has an installed capacity of 7.7 million tons, which is an uncommon reality due to the size of the island and leads to greater competitiveness within the market.

Let’s analyze the data in local currency and investigate the average price of cement in 2012 in the Dominican Republic versus the average cost of cement in 2021. We will find that the increase in pesos in 8 years has been 20%, while the accumulated inflation of the country is almost 30%, which represents that cement is one of the construction inputs with the lowest price increase in local currency in the country.

According to the information provided, cement is one of the construction products that has varied the least in price despite the increases in international markets, compared to other products such as wood, flooring and ceramics, PVC pipes, wires, among others.

According to data from the Central Bank of the Dominican Republic, the construction sector is one of the fastest-growing sectors in the country in 2021, which is helping the nation’s economic recovery, and the stability of cement prices and the high market supply capacity of local producers is contributing to this growth.

Gray cement production and sales have registered significant declines, which are reflected almost equally in the construction sector’s growth.

The cement industry still has a long way to go to return to the levels of previous years. Still, it is betting on the future of the domestic economy and on continuing to strengthen its solid market position.

Despite the adverse effects on the local market caused by the COVID-19 pandemic, the industry is in the process of recovery.

Help
According to data from the Central Bank of the Dominican Republic, the construction sector is among the fastest-growing in 2021, helping the nation’s economic recovery.
Lowest
The lowest average price in all of Central America and the Caribbean for a bag of portland cement is US$7.46 in El Salvador, while in the DR, the average cost is US$6.5.