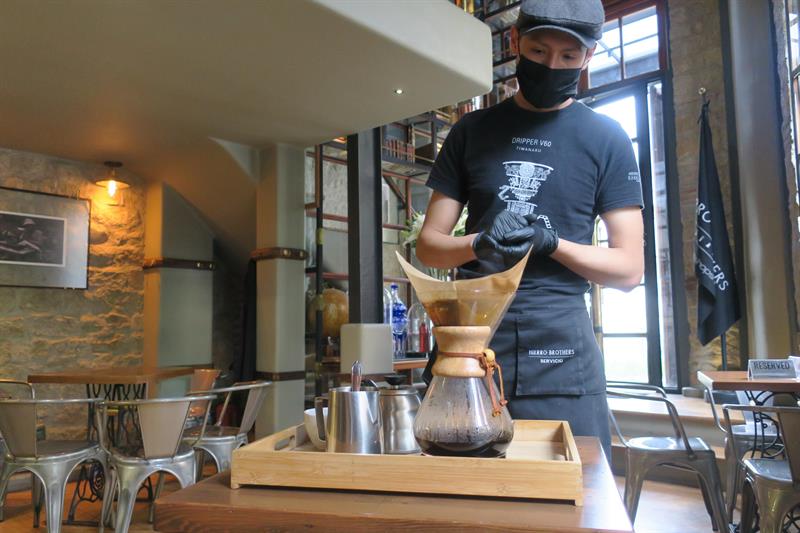 In 40 states, hourly pay still does not exceed $ 5 for workers authorized to receive tips. (FILE)

The service sector is one of the fastest-growing in the United States but pays the worst wages.

Slavery” survives in the 21st century, who is fighting to abolish federal legislation that sets the pay of $2.13 per hour for restaurant workers, particularly waiters, in the world’s leading power.

“It’s an economic, racial and gender justice problem that has only gotten worse under covid-19,” charges Jayaraman, one of the founders of One Fair Wage, an organization that advocates for decent incomes and job security for workers in the sector.

The service sector is one of the fastest-growing sectors in the United States but pays the worst wages. For example, the restaurant industry alone employs 14 million people. Of those, six million supplement their salaries with tips.

“Many restaurant corporations consider that it is the customers who have to pay the wages of their workers,” laments this energetic woman to AFP.

In restaurants, cabs, manicure, hairdressing, and now the workers of companies that operate through apps, at the time of payment, the customer has several options: add 18%, 20%, 25%, or even more tip, which completes his salary.

Although wages are often dictated by the market, in 40 states, hourly pay still does not exceed $5 for tipped workers. In addition, only in seven states have wages been brought up to the $15 minimum wage minimum income/hour for all other workers.

The attack on the Twin Towers, in which 74 workers were killed at the luxurious Windows of the World restaurant on the 107th floor of one of the towers, marked a turning point in the struggle for a fair income.

Many survivors were placed in other company restaurants. But others were left without jobs, and the families of the victims were without income.

That’s when One Fair Wages was created. “We started by seeking help for families who lost loved ones and workers who lost their jobs,” Jayaraman says.

Today, with 300,000 members, the movement is fighting for Congress to enact legislation to increase the federal minimum income for these workers.

At a recent meeting organized by this movement, former Secretary of State Hillary Clinton wondered why it is difficult to convince every state and Congress that “no person in America should work for $2.13 an hour.”

New York is an isolated case, Jayaraman admits. In good restaurants, waiters can make up to six figures a year. But that’s the exception.

Brian, a 29-year-old waiter who has been working in the industry for ten years, explains to AFP that the city pays $15, although tipped servers get $10 an hour.

Brian won’t say how much comes into his bank account from tips, but he assures that being a waiter is the best-paying hourly job in the city.

“You have a better chance of making more money than any other job,” he assures. The owners of his restaurant, located in a residential area east of Central Park, even offer their employees health insurance.

A luxury that not everyone can afford. Javier, a Mexican who works in a fast-food chain in the Grand Central Station area, assures that he can earn up to 2,300 dollars but at a stroke of hours. “When you exceed the statutory 40 hours a week, overtime is paid at $22.50,” he says with satisfaction to AFP.

According to a recent study by One Fair Wage, about a third of workers are suffering more violations of their rights than last year, and tips have fallen, while sexual assaults and abuse have increased in a sector that employs mostly women.

Since the coronavirus shutdown of the restaurant industry, many workers have left for other jobs. The latest Labor Department data show that as of July, the industry had lost nearly 1 million jobs from pre-pandemic levels, and 75% of employers in the sector were having difficulty finding staff, the highest level recorded in two decades, according to the National Restaurant Association.

Barbara Sibley, the owner of La Palapa Mexican food restaurants, has opted to pay fair wages to her workers. “Employees are part of what we do. I couldn’t do anything without them,” she tells AFP.

Along with hers, a thousand restaurants across the country have joined a new ethic where employees receive wages and social benefits.

“When you talk about a business plan it’s complex because you have to take into account other costs and things, but if you plan to have equity you make the system you’ve created work. So it really is a choice,” she concludes.

“It’s time finally to end this legacy of slavery. It’s a disgrace to the country,” Saru Jayaraman reasserts a view held by many.

Editor: Your new information is incorrect. Because I am American Citizen and Expat to the Dominican Republic. I must explain you about Federal Hourly Law in the United States. The Hourly Rate is $7.15 legally. Most competitive companies, for example, Amazon (Shop Online) and Walmart and Target (Stores) in the United States are like La Sierna, Bravo, Jumbo or Plaza Lama Stores in Dominican Republic. The Amazon, Walmart and Target provided a high wages to their employees.average $15.00 USD hourly rate now. The La Sierna, Lama Plaza, Bravo and Jumbo provided a low wages to their employees average RD$ 169 ($3 USD) hourly rate now.

This is just another libtard publication. Facts are irrelevant. Their only goal is to continue to control the mentally challenged and keep them angry

Here in Las Vegas baristas in coffee shops make $15-$25 an hour and it is not uncommon for a waitor or waitress to make $100,000 per year once they work their way up into the nicer restaurants.

Lots of bias in this read.